The Cottage on Greenwich Ave. to Open March 22 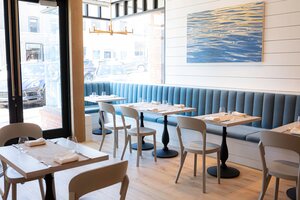 “I am ecstatic to be just a few short weeks away from opening the fourth restaurant location for our company, Full House Hospitality Group, on the bustling and vibrant Greenwich Avenue,” said Lewis, who recently received his second nomination as a semi-finalist for the James Beard Awards’ Best Chef: Northeast.  “We are so grateful for the continued support of the community as we’ve worked hard to have this opening happen as quickly as possible.  I can’t thank my entire team enough at all of our locations for their support and hard work to help us reach March 22!”

The seasonal menu at The Cottage Greenwich will incorporate ingredients from local purveyors and farms in the Connecticut and New York area.  It will feature several classic dishes from The Cottage Westport, including Wagyu Beef Brisket Steam Buns, Duck Fried Rice and The Cottage Burger, but will also feature new small plates for sharing, house made pasta, signature items such as Miso Black Cod Crepe, Foie Gras & Duck Sausage and Santa Barbara Uni Toast, vegetable-centric dishes and gluten free options.  The dessert menu will also celebrate the seasons, with the addition of a new sundae menu offering creative and unique after dinner choices.

The beverage program will also celebrate the flavors of the season.  The wine list will feature an array of choices from classic regions by the glass and bottle.  Classically inspired, technique-driven cocktails, including several with no- or low- alcohol options, will incorporate classics from The Cottage Westport, but also offer unique recipes developed for the Greenwich location.  A seasonal Martini menu will extend rotating drinks for guests, and Japanese flavors, techniques and ingredients will be incorporated into some options on the menu in homage to the group’s OKO brand.  Several beers will also be available on draft and by the bottle/can, with a particular emphasis placed on sourcing local beers from the New England and Connecticut area.

“Executive Chef Christian Wilki and Director of Hospitality Ralph Leon, who are now part of their third opening with our group, will help oversee the launch and opening in Greenwich,” added Lewis.  “Our group of dedicated and creative talent continues to grow with the addition of Gianfranco Olivier as Sous Chef, and James Lucchesi as Bar Manager.  It is truly my team that is the heartbeat of the restaurants, putting not only their expertise but also heart into every dish and drink that is served to a guest.”

Architect Rick Hoag from Frederick William Hoag Architect and Interior Designer Megan Zwick from MZ Interiors again collaborated with Lewis and his team on a modern interpretation of the original intimate location in Westport. The more expansive space on Greenwich Avenue allowed for an "exterior" within the interior. The kitchen space was imagined as a separate structure within the structure and is wrapped with irregular board and batten "exterior" paneling in a soothing and dramatic smoky blue hue.  The dining areas are clad in the same familiar shiplap as the first location with white oak columns and beams and divided into three distinct dining areas lined with cozy channel-tufted velvet banquettes in an inviting and complementary soft teal color.  The front dining room features a cocoon-like round banquette and views of Greenwich Avenue, while the center dining area has more curved banquettes and a welcoming bar with thick Carrara marble countertops and warm oak and mirror shelves. Lacquered bistro chairs, rustic tables with wrought iron bases and sleek brass chandeliers complete the warm dining environment.  The Cottage’s signature Chef’s Counter offers four seats at the second marble top bar counter inviting birds eye views directly into the open kitchen area.  Paintings, black and white photography and live greenery and floral arrangements providing accents to the space.

The Cottage will be open Tuesday-Saturday for dinner service, expanding to offer lunch, Sunday brunch and Sunday Dinner, as well as full menu offerings for takeout, later this Spring. On- and off-site private event options will also be available.

The restaurant will begin accepting reservations on Tuesday, March 15 for its opening date and beyond via OpenTable.com, or by contacting the restaurant at 203-769-1220.

Brian Lewis is one of the most celebrated chefs in the Northeast, lauded for his commitment to quality and seasonally driven American cuisine featured at his restaurant, The Cottage, as well as his love for Japanese cuisine at his other restaurant concept the popular, OKO, with locations in both Westport CT. and Rye, New York, both under his flagship Full House Hospitality Group brand.  The Cottage, with locations in Westport and Greenwich, Connecticut, was recognized with an “Excellent” review in the New York Times, after only being open for four months, commending Lewis’ sophisticated menu in a cozy setting.  With Forbes proclaiming that OKO’s Westport location is “competitive with the best in Manhattan,” the restaurant opened a second location in 2019 in Rye, New York.  This location was named to MICHELIN Guide’s list of New Plate Establishments in New York in 2021.

Lewis was also honored in 2018 and again in 2022 as a semi-finalist for the James Beard Awards’ Best Chef: Northeast.

He first received national recognition as the Founding Executive Chef of actor Richard Gere’s The Bedford Post Inn, a Relais & Chateaux property that featured two destination restaurants, The Barn and The Farmhouse. There, he acquired national acclaim including Esquire Magazine’s “Best New Restaurant” list in 2009, and an “Excellent” review in the New York Times for his thoughtful and consciously sourced cuisine. He launched his first solo venture in March 2012 with elm, where he was once again named to Esquire Magazine’s “Best New Restaurant” list, this time in 2012, before leaving to focus on launching The Cottage in Connecticut’s Westport neighborhood.  Lewis has had the honor of being invited to cook five dinners at the historic James Beard House in New York City, most recently in January 2017 on behalf of The Cottage.  He has made appearances on The Martha Stewart Show, TODAY Show, Fox & Friends and was a Winner on Beat Bobby Flay.

Raised in Westchester, New York, Lewis discovered his love for cooking at a very early age. He graduated from the Culinary Institute of America with honors and went on to earn his bachelor’s degree in business Management from Johnson and Wales University. Early experiences working under the guidance of legendary chefs like Jean Louis Palladin and Marco Pierre White strongly shaped Lewis’ culinary style to what it is today.

The Cottage is the vision of chef Brian Lewis and represents his commitment to produce Connecticut’s premier neighborhood destination for the finest locally sourced cuisine. With locations in the heart of Westport and Greenwich, Connecticut, The Cottage elevates the standard for seasonal American cooking delivered with casual simplicity and coastal charm. Lewis’ award-winning dishes are hand crafted with exceptional ingredients procured from local purveyors and farmers responsible for growing, raising, harvesting, and producing within the region. Menus change weekly to reflect the season’s best bounty.  For more information, visit www.thecottage.kitchen.