Connecticut Flags Lowered To Half-Staff in Honor of the Victims of the Mass Shooting in Highland Park, Illinois 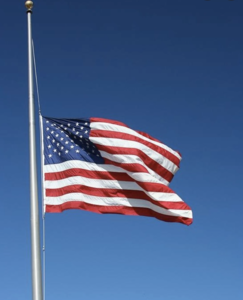 Governor Ned Lamont today announced that – in accordance with a proclamation from President Joseph R. Biden, Jr. directing flags to be lowered throughout the country as a mark of solemn respect for the victims of the mass shooting in Highland Park, Illinois – he is directing U.S. and state flags in Connecticut to be flown at half-staff beginning immediately until sunset on Saturday, July 9, 2022.

“Another day in America yields another episode of senseless violence and death at the hands of a deranged gunman,” Governor Lamont said. “I am heartened that the U.S. House and Senate acted in a bipartisan manner in recent days to take action on this epidemic of gun violence that has plagued the United States for far too long and has cost the lives of far too many. But we must not become complacent or grow numb to this epidemic. We must continue pushing our nation to enact meaningful reforms that the overwhelming majority of Americans support.”