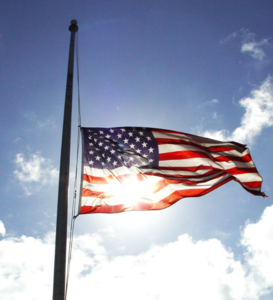 Governor Ned Lamont today announced that he is directing U.S. and state flags in Connecticut to remain lowered to half-staff on Sunday, September 11, 2022, in remembrance of the nearly 3,000 people who were killed in the 2001 terrorist attacks on the United States.

Flags are also currently at half-staff throughout the United States as a mark of solemn respect for the memory of Queen Elizabeth II, who died on Thursday. Flags should continue flying at half-staff for this purpose through sunset on the date of her internment.

Additionally, Governor Lamont today announced that the state will illuminate the Pearl Harbor Memorial Bridge in New Haven – informally known by many residents as the Q Bridge – in red, white, and blue lights beginning at dusk on the evenings of Saturday, September 10, and Sunday, September 11, in recognition of the anniversary. Beacons capable of projecting light nearly six miles into the clear night sky will be lit until the early morning hours.

“One of the greatest tragedies in American history hit close to home on this day 21 years ago, and we will forever pay tribute to the nearly 3,000 innocent lives that were taken all too soon,” Governor Lamont said. “We honor the heroes who lost their lives while attempting to save others, many of whom were first responders who answered the call of duty in the protection of complete strangers. We also continue to pray for the brave men and women of the U.S. military who serve our nation and protect our freedoms, including the many military heroes whose lives were lost in the ongoing battle to keep us safe since 2001. On this anniversary, let’s remember that our many differences are what make our country great, and despite those differences, we can unite as Americans and stand together in support of our common values and our respect for one another.”

“September 11, 2001 is a day that will forever live in infamy in our collective American history,” Lt. Governor Susan Bysiewicz said. “Today, we honor the memories of all those we lost on September 11th, and all of the brave souls who risked their lives to help their fellow Americans. We thank our first responders and military personnel for protecting and defending our country. Our gratitude for their service is knows no bounds. May this day continue to serve as a reminder that we must remain committed to each other as people, and as Americans.”

The State of Connecticut’s official 9/11 memorial honoring the victims of the attacks is located on a peninsula at Sherwood Island State Park in Westport, where on a clear day the Manhattan skyline can be viewed across the Long Island Sound. It features a stone engraved with the names of the 161 people with ties to Connecticut who were killed in the attacks. The state park was chosen as the site for the memorial because it is the location where many people in the immediate aftermath of the attacks gathered to observe the devastation on Lower Manhattan across the sound. The site was also used by the Connecticut National Guard in the following days and weeks as a staging area for Connecticut’s relief efforts to New York City.