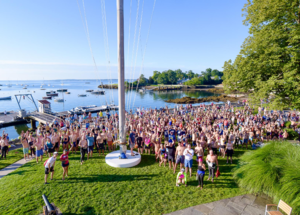 Swim Across America Long Island Sound chapter (SAA-LIS) was founded thirty years ago with only 17 swimmers, who raised $15K for the cause. Since 1992, SAA-LIS has grown to be the organization’s largest chapter whose swimmers now have raised over $23 million life-saving dollars.

“Unfortunately, everyone knows someone who has cancer or has lost a loved one to the disease,” says SAA-LIS Executive Director Tony Sibio. “We at SAA-LIS are a family of incredibly dedicated swimmers, kayakers, and volunteers, who participate year after year because we know we play a key role in helping to eradicate cancer forever. I couldn’t be more proud or thankful to our participants who over the years have continued to bring hope to those battling cancer.”

The fundraising activities of SAA-LIS have already had a profound impact. The chapter was instrumental in funding some of the most exciting cancer news this year with the announcement of a clinical trial at Memorial Sloan Kettering which was published in

The New England Journal of Medicine and showed a 100 percent success rate in treating patients in a phase 2 clinical trial for advanced rectal cancer with dostarlimab, an immunotherapy treatment produced by GlaxoSmithKline. The clinical trial at Memorial Sloan Kettering was funded by early-stage grant funding from SAA-LIS.

Although the swim season is officially over for 2022, donations are always welcome and can be sent to SAA-Long Island Sound, P.O. Box 217, Larchmont, NY 10538.

“SAA-LIS has come a long way in the past three decades, but we won’t stop swimming and fighting until cancer is gone for good,” adds Mr. Sibio.