Details
Published on Tuesday, 22 February 2022 16:36
Written by The Ridgefield Playhouse 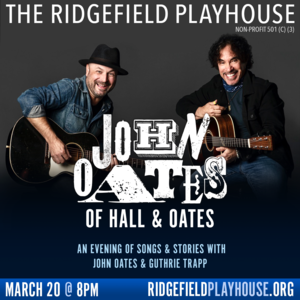 John Oates is one half of the best selling duo of all time, Hall & Oates, and now he’s flexing his chops as a solo artist in a rare and intimate performance at The Ridgefield Playhouse on Sunday, March 20th. The show is a different kind of duo: Oates is joined by guitar sensation Guthrie Trapp for “An Evening Of Songs And Stories,” and the two artists will perform Hall & Oates classics and some chestnuts from the blues and roots music that inspire them.

Get tickets to John Oates (of Hall & Oates): An Evening of Stories and Songs (with Guthrie Trapp) at The Ridgefield Playhouse on Sunday, March 20th at 8pm.

In addition to his work with Hall & Oates, the legendary pop duo that dominated charts and won hearts for decades, John has recorded seven solo albums, produced a DVD docu-concert called “Another Good Road” and authored a best-selling memoir titled “Change of Seasons.” He curated and produced the “7908 Aspen Songwriters Festival” which was held at the Historic Wheeler Opera House in Aspen Colorado from 2010 to 2012 and featured an impressive list of performers such as: Allen Toussaint, Keb Mo, Kenny Loggins, Sam Bush, Shawn Colvin, Matt Nathanson, Bob Scheneider, and J.D. Souther.

Joining John Oates to add to the proceedings is Guthrie Trapp, one of Nashville’s preeminent guitar talents. Trapp is at home with all styles of music and is a naturally soulful and energetic player, providing a depth of texture and an endlessly creative musical foil for Oates. He has worked with artists such as Garth Brooks, John Oates, Alison Krauss, Billy Gibbons, Dolly Parton, Lyle Lovett, Dennis Quaid, Randy Travis, Vince Gill, Trisha Yearwood, Travis Tritt, Patty Loveless and George Jones…to name just a few.

Part of the Pepsi Rock Series Driven by North American Motor Car. The media sponsor for this event is WFUV. Visit Eddie’s Pizza & Pasta the night of the show and enjoy a complimentary glass of house wine with your entree when tickets are presented! For more information or to purchase touchless print at home tickets ($70) go online at www.ridgefieldplayhouse.org or visit or call the box office at (203) 438-5795. The Ridgefield Playhouse is a non-profit performing arts center located at 80 East Ridge Road, parallel to Main Street, Ridgefield, CT and is committed to keeping the arts alive and available to all.