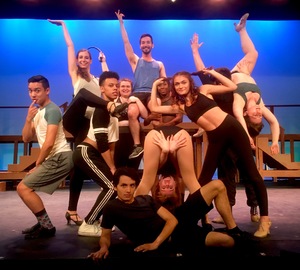 “Welcome to Cabaret!” echoes from the rehearsal hall where actors from around Westchester are busy rehearsing the musical CABARET, with Stage 2 at the White Plains Performing Art Center. The production runs August 3-12 and one of the designers originally hails from Harrison.

Winner of the 1967 Tony Award for Best Score and Best Musical and the 1998 Tony Award for Best Revival of a Musical and featuring memorable songs, including “Willkommen,” “Cabaret,” “Two Ladies” and “Maybe This Time,” CABARET tells the story of the infamous Kit Kat Klub at the cusp of the 1930’s in pre-WWII Berlin. As Germany slowly yields to the emerging Third Reich audiences are invited to leave their troubles at the door and indulge. As life in Germany grows uncertain, will the allure of Berlin nightlife be enough to get them through the tumultuous times?

CABARET is Directed and Choreographed by MK Lawson with Music Direction by Katie Luekens Chan Chee. Scenic Design by Jim Foster, Costume Design by Molly Seidel, Lighting Design by Noah Platte, originally from Harrison, Sound Design by Robert Isley, Stage Managed by Allison Queen. Music by John Kander, lyrics by Fred Ebb, book by Joe Masteroff, based on the play by John Van Druten, and the stories by Christopher Isherwood.

CABARET performs August 3-12 at the White Plains Performing Arts Center, minutes from the White Plains Metro North Station. It is located on the third level of City Center off Mamaroneck Avenue in downtown White Plains. Tickets start at $27. For tickets visit the theatre box office or call 914.328.1600 Monday-Friday, 11am-6pm. Tickets can also be purchased online at wppac.com. For group sales, please contact This email address is being protected from spambots. You need JavaScript enabled to view it. .

CABARET is produced by Stage 2, a program created by WPPAC to bridge the gap between our Conservatory and Mainstage, giving college and community performers the chance to work in a regional theatre under the guidance of professional artists. More information can be found at http://wppac.com/shows/cabaret/