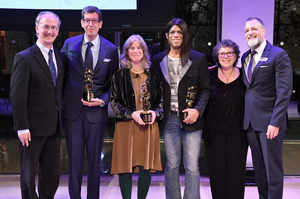 The Institute for Music and Neurologic Function (IMNF), a non-profit organization dedicated to advancing scientific inquiry into music and the brain, and developing clinical treatments to benefit people of all ages, hosted the Music Has Power Awards, held at the Times Center on November 4. This year’s honorees were Jazz guitar legend, Stanley Jordan, professor, leading researcher in neuroscience and music, Nina Kraus and Jay Stark, Chair Emeritus, IMNF Board of Directors.

“My earliest feelings of connection to the Institute were triggered by my perception of how important music is to our emotional well being but I soon learned what it really meant for neurological and physical health,” said Mr. Stark as he expressed his thanks for the recognition and his hopes for IMNF’s research and the “healing and happiness that music therapy provides.”

Upon receiving his award and giving thanks, Mr. Jordan spoke about the power of music therapy. “Even before I heard about music therapy I had an intuition that music can help with the healing process. A lot of people think they know what music therapy is but there is a lot more to it, he said.” Stanley then spoke of the benefits of music therapy for those with physical, emotional and cognitive issues as well as those battling addiction to decrease anxiety and promote calmness, stimulate memory, increase range of motion and reduce pain.

Emceed by former PBS broadcaster Midge Woolsey, the Music Has Power Awards began with a cocktail reception and then moved into the beautifully appointed theater for performances. Funds raised through this celebration will support patient care along with clinical and scientific research.

“We are thrilled to honor Dr. Kraus for her contributions to auditory perception research which helps inform our clinical work and to recognize Stanley Jordan who has long been a supporter of music therapy,” said Dr. Concetta Tomaino, Co-Founder and Executive Director of IMNF. “It is especially meaningful to honor Jay Stark for his leadership as IMNF board chair during our transition to Wartburg. I thank the Wartburg Foundation and our many donors whose generosity will allow us to broaden our impact not only within Wartburg but nationally and internationally.”

The award given to honorees was designed specifically for IMNF. Past recipients include physicians, scientists, musical artists, performers, and members of the music industry and business community. The event recognizes the accomplishments of exceptional individuals who have brought new understanding to the use of the power of music to awaken and heal. Celebrity performers have graced the stage at previous Music Has Power Awards to honor these individuals including Chris Martin, Dominic Chianese, the Beastie Boys, Michael Feinstein, Bruce Hornsby, Dustin Hoffman, Moby, Vanessa Carlton and Kris Kristofferson.

In 2017, IMNF made its new home at Wartburg, a premiere senior residential and healthcare facility in Westchester County, NY. Through Wartburg’s Outpatient Center, the Institute offers individualized music therapy for those living with neurologic issues such as Aphasia, Alzheimer’s and dementia as well as children with developmental needs. IMNF also hosts free programs such as “Healing Music”, a program for veterans with traumatic brain injury, neurological issues and PTSD and a Parkinson’s support group on Wartburg’s 34 acre campus.
“The partnership between the Institute and Wartburg continues to elevate Wartburg’s Creative Aging & Lifelong Learning programs,” said Dr. David J. Gentner, Wartburg President and CEO. “Through best practices, the Institute enhances the quality of life of those we serve, many of whom are medically indigent. Congratulations to this year’s honorees, I am looking forward to next year’s 25th-anniversary event, and my continued gratitude to Wartburg’s Foundation for their generosity and support with this initiative.”