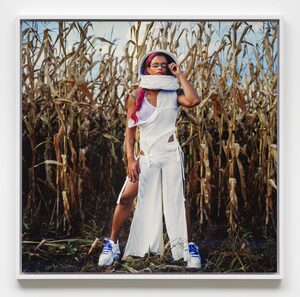 The Aldrich Contemporary Art Museum is pleased to announce the list of twenty-six emerging artists participating in the landmark presentation of 52 Artists: A Feminist Milestone, on view June 4, 2022 to January 8, 2023.

The exhibition celebrates the fifty-first anniversary of the historic exhibition Twenty Six Contemporary Women Artists, curated by Lucy R. Lippard and presented at The Aldrich Contemporary Art Museum in 1971.

The new artists, who are all based in New York City, will have not had a major solo museum exhibition in the United States as of March 1, 2022, aligning both with The Aldrich’s mission of representing the work of emerging artists and with Lippard’s original mandate for the 1971 exhibition.

“This group of 26 emerging artists reflect the revolutionary advancement of feminist art practices over half a century and exhibit a diversity of experiences and a multiplicity of sensibilities united by a twenty-first century feminist expression that is inclusive, expansive, elastic, and free,” said The Aldrich’s Senior Curator Amy Smith-Stewart, who curated the contemporary selection.

52 Artists will encompass the entirety of the Museum (approx. 8,000 sq. ft)—the first exhibition to do so since The Aldrich’s new building was inaugurated in 2004. The exhibition is organized by The Aldrich’s Senior Curator Amy Smith-Stewart and independent curator Alexandra Schwartz, with The Aldrich’s Curatorial Assistant Caitlin Monachino.

“52 Artists: A Feminist Milestone is one of our most ambitious exhibitions to date,” said Cybele Maylone, Executive Director of The Aldrich Contemporary Art Museum. “The exhibition charts the Museum’s commitment to emerging and underrepresented artists over time, and offers an unparalleled opportunity for vital scholarship about the historic legacy of the 1971 exhibition. We are delighted to bring together this exceptional roster of artists for this timely and important show.”

On view at The Aldrich from April 18 to June 13, 1971, Twenty Six Contemporary Women Artists was organized by writer, art critic, activist, and curator Lucy R. Lippard, who viewed curating this landmark exhibition as an activist gesture. In its catalogue, she states: “I took on this show because I knew there were many women artists whose work was as good or better than that currently being shown, but who, because of the prevailingly discriminatory policies of most galleries and museums, can rarely get anyone to visit their studios or take them as seriously as their male counterparts.” With this exhibition, Lippard arguably founded feminist curatorial practice in this country.

Lippard’s original 1971 exhibition at The Aldrich was one of the first institutional responses to the issue of women artists’ invisibility in museums and galleries. More specifically, the show offered a rejoinder to the protests by the Ad Hoc Women Artists Committee (founded by Poppy Johnson, Brenda Miller, Faith Ringgold, and Lucy Lippard) over the absence of women in the Whitney Museum of American Art’s 1970 Sculpture Annual. Twenty Six Contemporary Women Artists opened the floodgates to a host of other feminist exhibitions throughout the 1970s, signaling Lippard’s emergence as a visionary feminist curator and critic and marking the debut of many groundbreaking artists. 52 Artists not only celebrates this radical exhibition but underscores its ongoing influence on future generations of artists.

The original 1971 catalogue was designed by architect and scholar Susana Torre. A new, 200-page softcover book designed by Gretchen Kraus, The Aldrich’s Design Director, and co-published with Gregory R. Miller & Co., will accompany the exhibition. This significant catalogue will include new essays by Lippard, Smith-Stewart, and Schwartz, as well as rare historical documentation of the original exhibition, images, installation views, and checklists from both the 1971 and 2022 shows.
Participants:

The artists whose work was presented in the original 1971 exhibition are as follows. All but three of the original twenty-six artists will have work included in 52 Artists (*Starred artists are not participating):