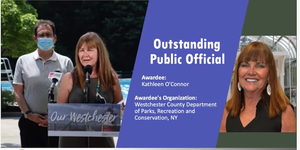 This award is presented to a nominated, elected or appointed federal, state, or local official, including commissioners or board members, who has contributed significantly to the benefit of NACPRO member agencies and demonstrated exemplary leadership in the parks and recreation field.

Over the course of the past year, O’Connor’s leadership not only benefited the park system, but the greater Westchester County community. In response to the COVID-19 pandemic, O’Connor worked with local and state officials to transform the Westchester County Center and Glen Island into a field hospital and one of the country’s first drive-thru testing sites, respectively. At the same time, she began to address the community’s need to mourn, and along with the administration of Westchester County, developed a memorial dedicated to the victims of COVID-19, “Ribbons of Remembrance,” located at Lenoir Preserve in Yonkers and built by parks employees.

During this time, the need for recreational outlets became increasingly essential and O’Connor mobilized the staff and met the demand. She and the staff worked hard to keep the summer months as normal as possible by opening the pools and beaches and children’s summer camps safely. Along with the recreation department, O’Connor reworked the popular Screenings Under the Stars program into a drive-in movie experience and Bicycle Sundays was extended through the early fall. In the winter, she worked closely with the Westchester Parks Foundation to reimagine Westchester County tradition, Westchester’s Winter Wonderland, as a drive-thru light show at Kensico Dam Plaza.

Westchester County Executive George Latimer said: “Commissioner O’Connor did an outstanding job during the pandemic leading her staff through the unpredictable, and keeping parks and recreational areas open and safe for the residents of Westchester. This award is well-deserved and I am proud of her hard work, dedication and commitment to our beautiful County parks system.”

The virtual awards presentation, produced by Metro Parks in Nashville, can be viewed here.