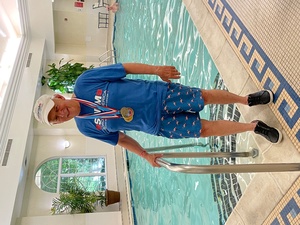 Don Fowley, a resident at The Osborn’s Sterling Park Independent Living Community, marked his 29th year of participating in Swim Across America, finishing a half mile to help raise more than $1.2 million for cancer research. The 84-year-old became dedicated to this cause after losing his first wife to cancer. He was the most senior participant in Swim Across America - Long Island Sound, which included 850 swimmers this year.

“You have to stay active and positive as you get older,” said Mr. Fowley, a very well-known and popular Osborn resident. “I try to help people all the time—it makes me feel good as well as those I’m helping. Everyone wins.”

Don Fowley volunteers to head the Dining Committee, which provides resident feedback to The Osborn’s Culinary Institute of America trained chefs. He brings his expertise from a career in the food industry, which included catering for the crew and performers at the original 1969 Woodstock Music Festival, among other highlights.

According to The Osborn’s President and CEO Matthew G. Anderson, “Don Fowley epitomizes the active lifestyle of Osborn residents. They continue to explore and enjoy activities that reflect their special interests. He represents the spirit of our community—vibrant people living a meaningful and engaged lifestyle.”

The Osborn’s environment is particularly conducive to maintaining independence, with walking paths and an acclaimed arboretum on its 56-acre landscaped campus. Mr. Fowley and the other Osborn residents enjoy frequent nature walks as well as the well-appointed gym, indoor pool and cultural activities.

Since its founding in 1987, Swim Across America has raised close to $100 million for cancer research and clinical trials. Proceeds from the recent swim will support immunotherapy research at the Swim Across America Laboratory, Memorial Sloan Kettering Cancer Center, pediatric oncology research at NewYork-Presbyterian Morgan Stanley Children's Hospital and the Cancer Support Team of Southern Westchester.