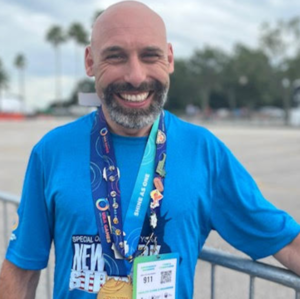 Over 5,000 athletes and coaches arrived in Orlando, Florida on June 5 to compete in the 2022 Special Olympics USA Games. Among them was star athlete Paul Asaro, of Eastchester, who has been a Special Olympics New York athlete since 1994 and a coach since 2008.

According to Asaro’s coach, Courtney Sim, the longtime athlete won two medals for his performance including the gold medal for the first-ever open swim competition and a silver medal in the Triathlon.

“I’m beyond proud to have been part of his journey. He is an incredible athlete to coach!” said Coach Sim.

The open swim competition was on Wednesday, June 8, 2022, at Luckys Lake in Central Florida. This was the first-ever Open Swim for the U.S. Special Olympics. “He edged out the competition for a gold medal with a time of 36:06!” explains Coach Sim.

“The Triathlon was held in Clermont, Florida where Paul received the silver medal with a time of 1:33:35!” Coach Sim says.