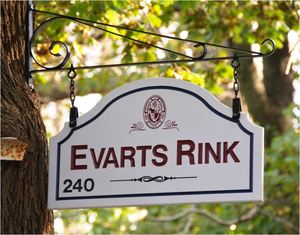 The Maxwell Evarts Memorial Rink, a major community hub and an iconic Northern Westchester landmark on Route 22 in Katonah, celebrates its 50th anniversary April 13-14 with a fun-filled, weekend-long slate of activities for both local families and former and current patrons of the facility located on the campus of The Harvey School.

Over the years, Evarts has been the rink where thousands of local residents first learned to skate as children, where many were introduced to figure skating, and where aspiring professional hockey players and Olympic hopefuls honed their skills to fulfill big dreams of becoming stars on skates. Seen at Evarts through the years were such luminaries as Olympic gold medalist skaters Dorothy Hamil and Katarina Witt and National Hockey League greats Gordie Howe, Bobby Orr, and  Phil Esposito, along with former New York Rangers Don and Dave Maloney who used Harvey’s rink for their youth hockey camp for many years.

Responding to the area’s growing interest in both hockey and figure skating in the late 1960s, Maxwell Evarts spearheaded a group of community-minded individuals associated with Rippowam School and the Bedford Bears to undertake a joint effort for construction of the only indoor ice rink in Westchester north of White Plains. Working with Harvey officials. Evarts and the group found a suitable location on what is now part of the school’s Jay Street (Route 22) 125- acre campus.

With the completion of the project in 1969, the dream became a reality for all those who had sought to provide the surrounding community with an indoor ice rink. The Bedford Bears left their 30-plus year outdoor home at Whites Pond in Bedford Hills and moved indoors to Evarts, aspiring figure skaters enjoyed a year-round practice facility, and Harvey’s hockey teams had a state-of-the-art rink to host their interscholastic games, no longer relying on a small campus pond to freeze enough to provide an icy surface for hockey activities.

The two-day 50th Anniversary Celebration at Evarts will feature quite a lineup of events:

Register in advance for either at harveyschool.org/rink50

Catch up and reminisce with coaches (past and present), hockey directors, former rink staff and longtime rink patrons.

Join HHFSC to skate to the tunes of the 1960s and experience ice dance as a way to improve skating and have fun on the ice.

Register in advance at harveyschool.org/rink50