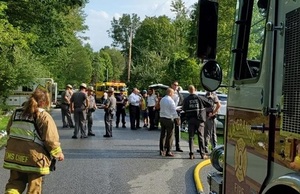 The aircraft pilot was tentatively identified as Francisco Knipping-Diaz, age 61, of Woodmere, NY, who died at scene.  His two passengers were identified as Eduardo Tio, age 50, also of Woodmere, NY, and Teoflio Antonio Diaz Pratt, age 52, of the Dominican Republic, both of whom sustained non-life-threatening injuries.

At the time of the crash, the home at 235 South Smith Road was occupied by Gerard Bocker, age 61, who has been tentatively identified pending confirmation at autopsy.  Also present in the home was Hannah Bocker, age 21, who was critically injured, and Sarah Bocker, age 30, who sustained non-life-threatening injuries.

The New York State Police, NTSB, and FAA continue to investigate the cause of the crash.