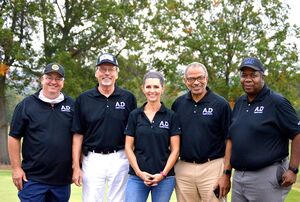 Aquiline Drones in Hartford put the squeeze on childhood cancer by serving as a sponsor of the 9th Annual Newington Rotary Lemonade Golf Tournament held on September 29, 2020 at Indian Hill Country Club in Newington, CT. The drone airline in Hartford helped to fuel the effort as the lunch and dinner sponsor. Additionally, a foursome from Aquiline Drones, led by Cathy Dionne, Director of Business Development, and Emily Guion, Office Manager, volunteered throughout day. They sold raffle tickets and helped with prizes between hitting the links.

“As a Newington resident, I am proud that our global company joined this crucial fight at the local level to help children everywhere,” explained Barry Alexander, CEO and Founder of Aquiline Drones. “We use drones as tools to help make the world a better place, so supporting charitable organizations is an important part of who we are as a company.”

Proceeds from the event will be added to the $175,000 collected by the Rotary Club thus far to aide in the research and cure for pediatric cancer. The nearly 100 tournament participants enjoyed a great round of golf, lunch and dinner, giveaways & raffles, along with contests for Hole in One, Longest Drive, Closest to the Pin and more.

The highlight of the day was an appearance by Alex's family, who provided updates on Alex's Lemonade Stand Foundation. The pediatric cancer charity was started in 2005 by the parents of Alexandra "Alex" Scott, who lived in Connecticut and suffered from neuroblastoma. Alex hosted the first lemonade stand at the age of four to change the lives of children with cancer.

Since 1960, the Rotary Club of Newington has been helping the local, national and worldwide community. The club is especially involved when it comes to helping children.