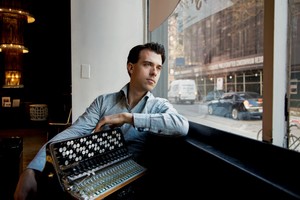 Hartford Symphony Orchestra celebrates a weekend of love with

It’s a Latin-infused festival of love with the Hartford Symphony Orchestra! The 2018-2019 Masterworks series continues this Valentine’s weekend with Latin Lovers starting on Friday, February 15 and running through Sunday, February 17, in the Belding Theater at The Bushnell in Hartford. These concerts will be led by HSO assistant conductor, Adam Boyles, and feature Julien Labro on bandoneón.

This program includes Copland's El Salón México, Piazzolla’s Libertango and Aconcagua, Concerto for Bandoneón, Frank’s Three Latin American Dances, and Márquez’s Danzón No. 2. Join us for a pre-concert talk one hour prior to curtain of each performance.

Copland’s dazzling El Salón México captures the spirit of a dance hall he visited during his first trip to Mexico. Piazzolla revolutionized tango music, and his sizzling Libertango intertwines the style with elements of jazz and classical. His fiery Aconcagua will feature the acclaimed Julien Labro on bandoneón. Contemporary composer Gabriela Lena Frank’s vivid Three Latin American Dances bears a kinship to Bernstein, and Márquez’s spirited Danzón No. 2 is one of the of the most popular contemporary Mexican compositions today.

HSO programs are funded part by the Greater Hartford Arts Council’s United Arts Campaign, the Hartford Foundation for Public Giving, and with support from the Department of Economic and Community Development, Connecticut Office of the Arts, which also receives support from the National Endowment for the Arts, a federal agency.