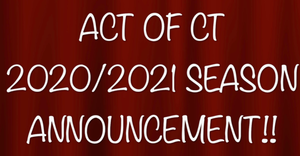 It is with great joy and excitement that ACT (A Contemporary Theatre) of Connecticut is able to announce the theater’s anticipated return with next season’s line-up of productions. After making the very difficult decision to cancel the remaining shows for this season, the ACT team has re-worked next season’s calendar to bring Ridgefield and the surrounding communities three unbelievable productions.

The 2020-2021 season will begin on October 1, 2020. ACT of CT’s Artistic Director, Daniel C. Levine says, “While it is quite possible that ACT would be able to open its doors before next season, we felt as though we wanted to make the most appropriate decision for both the theater and our community. Opening in the fall makes sense. Next season’s line-up is truly the perfect selection of shows after this period of isolation. I can’t wait to begin our work on these three incredible productions and to once again see our friends and neighbors. Our 2020-2021 line-up is entertaining, heartwarming, magical, and inspirational. Freaky Friday is the perfect show to re-open with. And if you are a Wicked fan, then Stephen Schwartz’s Snapshots will be non-stop smiles. Into the Woods remains my all-time favorite musical, and I am beyond excited for our audiences to see what we have in store with this production of Stephen Sondheim’s masterpiece.”

October 1 – 25, 2020
Book by Bridget Carpenter
Music by Tom Kitt
Lyrics by Brian Yorkey
Based on the novel Freaky Friday by Mary Rodgers and the Disney films
When an overworked mother and her teenage daughter magically swap bodies, they have just one day to make things right again. Freaky Friday, a new musical based on the hit Disney film, is a heartfelt, comedic, and unexpectedly emotional update on an American classic. By spending a day in each other's shoes, Katherine and Ellie come to appreciate one another's struggles, learn self-acceptance, and realize the immeasurable love and mutual respect that bond a mother and daughter. With music and lyrics by the TONY Award winning team of Tom Kitt and Brian Yorkey, Freaky Friday has become one of the most popular new musicals of the year!

Arrangements and Orchestrations by Steve Orich

Snapshots: A Musical Scrapbook is an original musical by Broadway legend Stephen Schwartz. Snapshots follows a suburban couple on the verge of divorce after 30 years of marriage. A hidden suitcase in their attic containing photographs of their life together reconnects them with their past as younger versions of themselves appear and play out “snapshots” from their relationship. Snapshots incorporates over two dozen of Schwartz's songs, including songs from Wicked, Pippin, Godspell, The Baker’s Wife, Rags, The Magic Show, Working, Children of Eden, and Enchanted. If you are a fan of Wicked (and other Schwartz musicals), this is the show for you!

A timeless and deeply relevant Tony Award-winning musical, Into The Woods is one of Stephen Sondheim's most inventive works. Directed by ACT’s Artistic Director Daniel C. Levine, this sophisticated fairy-tale mash-up tells the story of a Baker and his wife, who wish to have a child; Cinderella, who wishes to attend the King's Festival; and Jack, who wishes his cow would give milk. When the Baker and his wife learn that they cannot have a child because of a Witch's curse, the two embark on a journey into the woods to change their fate. Many wishes are granted, but as the characters discover, every wish can have far-reaching consequences and “anything can happen in the woods”.

Subscriptions for the 2020-2021 Season are available now through the ACT of CT website at actofct.org. Season packages include a 10% discount on tickets to the 2020-2021 mainstage productions, free ticket exchange per production and advance notification of additional events. Purchase tickets HERE.

ACT (A Contemporary Theatre) of Connecticut is a nonprofit 501(c)(3) Equity theatre located in Ridgefield, CT. Founded and led by Katie Diamond, Daniel C. Levine, and Bryan Perri, ACT of CT presents limited engagement runs of well-known Broadway musicals and plays, as well as world-premiere productions by the next generation of writers and composers. ACT of CT was honored with 11 BroadwayWorld Connecticut Awards in 2018-2019, its inaugural season. ACT of CT’s productions have garnered critical acclaim, too; they’ve been listed among the “top ten equity shows of 2019” by Hearst Connecticut Media Group, and have received similar “top ten” accolades from critics Nancy Sasso Janis and Jim Ruocco. The theatre company produces four shows per season, including one show in the “Presenting Stephen Schwartz!” Series (honoring ACT Artistic Advisor, Stephen Schwartz). All shows feature both Broadway stars and local Fairfield and Westchester County talent. In addition to fully produced main stage productions, ACT of CT hosts a New Works Series, The Broadway Unplugged Series, youth education classes, masterclasses, camps, workshops, and a conservatory program for high school students. ACT of CT is located at 36 Old Quarry Road, in the beautiful village of Ridgefield, CT.  Visit actofct.org for further information.