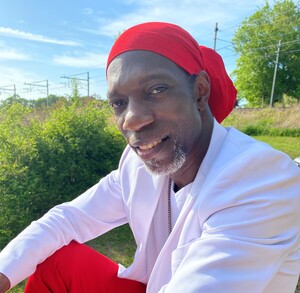 Inspiration. Hope. Healing. Faith. These days, most people are looking for an antidote to the despair, fear and uncertainty that filled 2020. After overcoming a lifetime of obstacles by following a spiritual path, Kenneth Hampton of Connecticut found success as an entrepreneur, music producer and composer. Now Hampton is sharing his affirmations to encourage others to let go of the past and start a new personal journey in his first book “Aspire for Change”.

“Ken embodies his philosophy that ‘A changed mind leads to a changed life’ as he strives to empower everyone to overcome their fears and let God lead them to create their best life,” said Judy San Roman, the book’s publisher. “Ken helped me through a difficult time with his radiant words, so I approached him about putting it into a book. I think it’s perfectly timed as we can all use a word of encouragement right now.”

Roman, an actress and producer, known for films such as Fair Market Value (2019), Rich Boy, Rich Girl (2018) and In Sickness, explained how she met Hampton while working on their first Netflix film, The Brawler. She immediately saw his kind heart and found their friendship to be extremely rewarding. Hampton started texting her daily words of encouragement that really moved her. She thought, who doesn't need reassurance?

For the book’s forward, Roman wrote, “It provides the kind of simple sayings we need to hear and believe to come to terms with loss, whether by death or a bad break up, stress or anxiety, how you were raised, made too many mistakes. When you read his positive affirmations, they will help settle your mind for and during those challenging times. You will find joy and wisdom here.”

"I look forward each morning to the daily inspirational messages I receive from my great friend Ken Hampton. All based on God’s word, it’s truly a blessing. Ken’s words of wisdom, encouragement and inspiration speak directly to my heart, always lifts my spirit and gets my day off to a great start!" - Deborah Allen, American country music singer, songwriter, author, and actress.

“Brothers building up brothers: Ken has been sending inspirational messages since I met him at the VMA After Party last year. It’s good to see brothers encouraging in these days and times. I hope this book has a major impact to bring out the best in people.” - Treach (Naughty By Nature)

The 64-page, inspirational compilation includes the following uplifting chapters: The Divine Love, Your Royalty Blessings, Queen’s Affirmation, King’s Affirmation, Self-Love and Royalty and Daily Royalty Reminder to reflect Hampton’s view of all people already belonging to and entitled to the rewards and blessings of the kingdom of God.

Hampton has also enjoyed a prolific career in the entertainment industry. He is the Founder and Co-Ceo of Raise Em Up Records, as well as the Founder, CEO and Composer of Composers Media Group LLC. He is Vice President of Sales for Reel Film Cinema and Executive Director of Acquisitions at Reel Film Distribution. Hampton is also Executive Producer, Producer and Head Composer for Continuum Motion Pictures and Producer and Head Composer for Velero Films. He is both Composer and Music Supervisor for NANDAR Entertainment.

To date, he has worked on over 50 projects with multiple film companies for Film and TV in all genres.

Hampton shared that his life could have turned out much differently as a Black boy raised by a single mother in an inner city, where he witnessed “domestic violence, crime, drug abuse, and injustice.” Music had always been a means of escape for many of his life’s issues. He initially dreamed of becoming a famous rapper. Then in 1999, Hampton’s best friend invited him to his church. His friend had already turned his life around and Hampton was struck by the pastor’s sermon to never let another man go through what you’ve been through. He finally gave his life to Christ.

“I vowed that until the day God comes to take my breath, I would love everyone, build and encourage them, spread God’s word and share His truth to everyone he places in my life,” said Hampton.  “God has given us the gift of life and we are the presents; we should unwrap our lives daily for others.”

Roman concluded, “I hope whatever your trial or tribulation, this book eases the pain and brings you comfort. We all have setbacks. We all grieve. It's part of our journey. This book is a blessing that will not let you be defeated.”

Kenneth Hampton is a spiritual force for a new generation. For over 20 years, he has inspired people from all walks of life by utilizing God’s word through love to motivate change. Ken connects with and ministers to thousands globally through all types of social media platforms. He is an author, entrepreneur, music producer and composer with successful career in the entertainment industry. He is the Founder/CEO of Composers Media Group, Founder/CEO of Raise Em Up Records, Music Director of Hoboken International Film Festival and Cohost of the JCT TV show. For information visit www.raiseemuprecords.com.