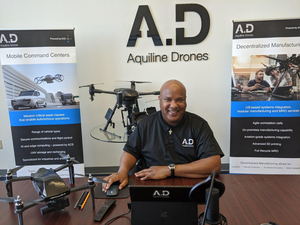 Since 1819, Connecticut has always been called “the insurance capital of the world.” Since the passage of Connecticut’s Captive Law in 2008, Connecticut has quickly distinguished itself as a world class Captive Domicile and as a center for innovation in captive formation and thinking. Now, one of the world’s fastest growing companies is seeking to update this classic tagline to include the word “drone” – and to then promote Connecticut as “The Drone and Insurance Capital of The World.”

Specifically, Aquiline Drones Corporation (AD), a Hartford-based drone solutions provider today announced that it has successfully completed the rigorous licensing process to establish its own insurance subsidiary - Aquiline Drones Indemnity Corporation (ADIC), through the State of Connecticut Insurance Department, making AD the first US drone manufacturer to do so. This insurance license allows AD to assume the risk of its entire group of companies, indemnify its continuum of products and services, as well as the ability for AD to insure the risk of its partners and affiliates such as Drone Volt (ALDRV) and Aerialtronics. ADIC will also indemnify the products utilized by AD’s supply of professional drone service providers (DSPs), nationwide.

“As a company founded by veteran airline pilots, safety has always been paramount to us and is the cornerstone of our growth,” said Aquiline Drones Founder and CEO Barry Alexander. “We’ve spent our entire professional lives managing risk at the highest levels on behalf of US airlines, the US military, other commercial aviation operations and now, throughout our unique drone technology ecosystem.”

Benefits delivered by ADIC through this crucial licensure are vast, indeed. They primarily include writing insurance policies to cover multiple lines of commercial UAV/drone operations which are based on AD’s definitive risk mitigation and management protocols. These methods are diligently crafted to maximize safety, and are backed by advanced analytics, data and technological processes derived from AD’s vertically integrated ecosystem. Chief among these services are drone manufacturing, cloud-connected drone operations, and drone safety training. AD intends on providing flexible and competitive commercial liability products to the larger UAV industry, both nationwide and globally.

“There are so many hobbyists and inexperienced drone operators out there who haven’t completed any formal UAV/drone training, nor do they have access to appropriate and flexible liability coverage,” adds Alexander. “Our goal is to introduce various aspects of safety at every level and opportunity in a UAV/drone operations environment, for every drone business or individual operator, in keeping them safe and compliant as well as protecting the interest of the general public,” Alexander continues.

“Captive insurance companies have been around for more than 100 years, but the drone industry is flying into new territory,” said Fenhua Liu, Assistant Deputy Commissioner, Captive Insurance Division for the Connecticut Insurance Department. “Aquiline Drones has broken new ground by creating ADIC to assume the risk of its entire group of companies. These are exciting times!”

According to the National Association of Insurance Commissioners, a captive is a wholly owned subsidiary that provides insurance to its non-insurance parent company or companies. They are typically established to meet the unique risk-management needs of the owners, members or industry. Additionally, they provide potentially significant tax advantages, which can prove integral to longevity and company profitability. Captives are formed to cover a wide range of risks and are subject to state regulatory requirements including reporting, capital and reserve requirements.

“From our inception, our underlying mission has been to build a full-service drone ecosystem, including an American-made manufacturing plant, drone pilot training academy, aviation-inspired cloud and mobile drone manufactory pod,” adds Alexander. “Our latest accomplishment of becoming a fully functional insurance company raises the bar for drone safety and expansion on a global scale.”

Barry Alexander, Founder and President of Aquiline Drones Corporation, has recently formed a separate insurance subsidiary - Aquiline Drones Indemnity Corporation (ADIC) - through the State of Connecticut Insurance Department, making AD the first US drone manufacturer to do so in the nation.