Calling All Bad-Ass Women Across Connecticut! 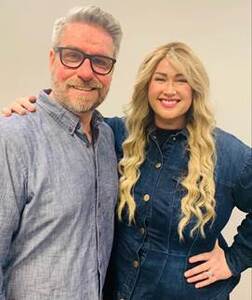 One doesn’t have to live in Hollywood to encounter some of the most famous celebrities when in fact, there are many local stars right here in Connecticut. The Power to B jewelry company, which quickly became a national brand after debuting at this year’s Academy Awards and beloved morning radio show hosts Christine & Salt from 96.5 TIC-FM, have recently teamed up to publicly recognize such individuals with a fun new campaign called, “The Bad-Ass Woman of the Week.”

Specifically, the program aims to reward women who have overcome a challenge and emerged stronger as a result with an empowering B Badass bracelet, as well as being a featured guest on the popular adult contemporary radio show. The first honoree- Dominique Ortiz of Derby, CT was named today in a surprise morning call by the radio hosts.

“At The Power to B, we celebrate women overcoming odds, reaching new goals, and lifting each other up,” said Raeann Baribault-Schwartz, co-founder of The Power to B. “That’s why we’ve partnered with Christine and Salt to feature a Bad-ass woman every week- and we know they’re out there!”

Each week, the Glastonbury-based jewelry company will pick a new bad-ass woman of the week and Christine & Salt will call and feature her on their radio show every Friday morning at 7:15 a.m.. She will also receive a B Badass bracelet to proudly wear and serve as inspiration to all those she encounters.

The program is open to any woman aged 18+, who has overcome adversity and come out on top. Individuals can either self-nominate or complete an entry form for a friend or relative: https://www.thepowertob.com/badass-woman-of-the-week/

Ortiz, a mother of 3-year-old twins, was the first honoree to be celebrated today over the airwaves for her compelling story of bad-ass success. Ortiz started a business in her home a couple years back as a side hustle after conquering fertility challenges. When her husband was laid off, Ortiz grew her business to immense proportions to provide for her family, often working until 3 a.m. when her babies were asleep. Listen to the entire interview here:
https://www.audacy.com/965tic/latest/local/badass-woman-of-the-week-dominique-ortiz

“From Oprah and Tom Hanks to Coldplay and Lizzo, Salt and I have talked to so many celebrities over our combined 50 years in the radio business,” said Christine Lee, morning show co-host at 96.5 TIC-FM. “But finding and recognizing the local heroines that walk among us each day on the streets of Connecticut is something that we’re super psyched to bring to light!”

Baribault-Schwartz explains that she created The Power to B jewelry line with her sister Christina Baribault-Ortiz because of their combined infertility issues that they both overcame by displaying visual messages of positivity throughout their homes. This inspired the third-generation jewelers to design trendy wearable words of encouragement to empower people of all ages to tap into their inner strength and courage. The collection emboldens everyone to B Badass B Strong, B Fierce, B Limitless or B Fearless. The bracelet links these power phrases with either a colorful bolo cord or a delicate chain accented with a black gemstone known for positive energy.

For more information on the line, visit https://www.thepowertob.com/.

About The Power to B
Created by sisters and designers Christina Baribault Ortiz and Raeann Baribault Schwartz in 2019, The Power to B fine jewelry collection aims to bring women together in joyful empowerment. The stunning 14k gold- or gold-plated phrase bracelets, necklaces and rings remind women to B Strong, B Fierce, B Badass, B Limitless, B Fearless, or B You. The Power to B is about being fearless enough to speak your dreams into the world and being strong enough to turn them into reality. Learn more at thepowertob.com.

About 96.5 TIC-FM
96.5 TIC is a hot adult contemporary radio station serving Hartford County, which is owned and operated by Audacy, The station has consistently clinched the number one position in its market as determined by Arbitron. Listeners of its popular weekday morning show can hear comedy, news, gossip, music, and more with Christine & Salt, Monday through Friday from 5:30am to 10am.

Christine Lee has been doing morning radio for over 25 years. She spent 18 years overseas while her father was stationed at various Air Force bases and got her start in radio at Armed Forces Radio and Television Network as an intern in Kaiserslautern, Germany. She attended the University of Nebraska, Lincoln where she earned a Bachelor of Arts degree in Journalism and has completed her Master of Science degree in Communication from the Newhouse School at Syracuse University.

PHOTO: Morning radio show hosts Christine & Salt from 96.5 TIC-FM, have recently teamed up with The Power to B inspirational jewelry line to publicly recognize women who have overcome challenges and succeeded in spite of them with a fun new campaign entitled “The Bad-Ass Woman of the Week”.