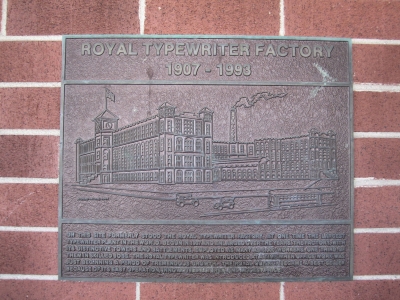 June 23 is Typewriting Day, a.k.a. World Typewriter Day. The blog Typosphere encourages people to observe the holiday by "using a typewriter in an unconventional manner," but in Connecticut, there's an easier and more relevant way to celebrate this revolutionary invention.

Today, take a minute to read about George Blickensderfer, the Stamford man who in 1892 received the patent for the first portable typewriter, and the industry that at one time employed 7,000 Connecticut workers. Or swing by Hartford's Real Art Ways building, which once belonged to Underwood Typewriter, or the Stop & Shop on New Park Avenue, where a plaque (pictured above) marks the site of the old Royal Typewriter factory that burned down in the 1990s.

You can also read up on typewriter manufacturers in places like Middletown, Bridgeport, Derby, and Norwalk on Antikey Chop, written by Connecticutian Greg Fudacz. And although the New Britain Museum of American Art's exhibit "Click! Clack! Ding!" has ended, you can read about it in the New York Times or listen to the Colin McEnroe show on the topic at WNPR.

Then, as you do some work on your laptop, reflect for just a second on how it used to be when the same task required correction fluid and a ribbon.