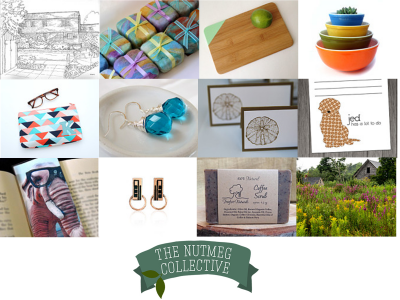 When Avon resident Kristen Skelton left her teaching job to care for her new baby, she soon found she needed "something else to do that didn't involve a six-month old." So, she says, "I started making stuff and I started selling it" on Etsy, the popular online marketplace for handcrafted goods. These days, Skelton and her husband have two kids, aged two-and-a-half and five; her "stuff" has become her business, Milo and Molly; and she's not just an Etsy seller but the team captain of Nutmeg Collective, a group of Etsy sellers with members across Connecticut.

Nutmeg Collective began in December of 2013, growing out of an earlier Etsy team called Team Hartbeat. It now has around 70 members, who live in every part of the state. The group is a resource for members seeking information about selling techniques and taxes, tips on local spaces that might be willing to stock their goods, and moral support.

Team members' Etsy stores feature everything from photographs to jewelry to vintage finds, and some run brick and mortar stores in addition to their online shops. What they all have in common, aside from living in the Nutmeg State, is their dedication to growing their businesses.

One seller who has seen such growth is Nutmeg Collective team leader Alonda Baird Juhasz, who owns Designer Dwellings in Stratford. She says her interior and event decorating work "used to be my main career, and Etsy was just a branch of that. Then Etsy started becoming the bigger part of it."

Baird Juhasz previously worked in the corporate world, but quit her bank job when she realized she craved "freedom and excitement, and no more grey cubicle." She now sells home accessories and gifts, what she calls "the finishing details that bring a room together," and her life is full of color - which customers love. "Not too many people offer teal cutting boards, and I had no idea there would be a demand for it, and there is, which is phenomenal."

Skelton, too, has noticed the desire for bright items. Her Etsy store is stocked with "modern homemade sewn goods," consisting mostly of women's accessories like jewelry and bags made from colorful fabrics. The palette is "the opposite of me," she says, noting that she usually dresses in plain white shirts. "I never realized how many people love purple!"

Skelton crafts her items and lists them online in moments when her children are otherwise occupied, and she says a lot of other Nutmeg Collective members also work at home, either because they are parents, have lost jobs, or are dealing with chronic health conditions that make standard schedules difficult. Being able to work at any time or anywhere isn't the only benefit to running a creative business; says Baird Juhasz, "you can get inspiration anywhere, too."

Currently, individual Nutmeg Collective members sell their wares at farmers' markets and craft fairs around the state, but Skelton says the team would love to host pop-up shops, or attend larger markets as a group. "We want to be an opportunity for all the members to sell in the community together," Baird Juhasz adds.

Until that happens, Connecticut shoppers interested in supporting local businesses can use Nutmeg Collective to bypass Etsy's sometimes finicky search function and find nearby craftspeople they may not have known about. "A lot of people are really excited" when they learn about the team, Skelton says. "They look at me like, 'I didn't know this was all here!'"