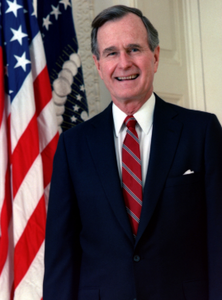 Governor Dannel P. Malloy today announced that he is directing U.S. and state flags in Connecticut to be lowered to half-staff beginning immediately in remembrance of President George H.W. Bush, who passed away on Friday evening.

Pursuant to U.S. Code (4 U.S.C. 7m), the flag shall be flown at half-staff for a period of 30 days following the death of a president or former president.  Accordingly, since no flag should fly higher than the U.S. flag, all other flags, including state, municipal, corporate, or otherwise, should also be lowered during this same duration of time.

Governor Malloy said, “President George H.W. Bush was not only the leader of our nation during a time of transition in a post-Cold War world, but he was also a son of Connecticut, a war hero, a baseball enthusiast, and a dedicated and selfless public servant.  His commitment to serve this nation when called upon in numerous ways – as an aviator, a congressman, the head of the CIA, vice president, and as president and commander-in-chief – illustrated his undying love of country.  Especially at this time as we mourn his loss, all of us as Americans should take a moment to reflect on the diplomatic ways that President Bush lived his life and the example he set for our nation, particularly in the years following his service in the White House.  He understood that living in the greatest democracy in the world also means that we may have differences of opinion in policies and ideology, but at the end of the day we are all Americans who love our country, whose peaceful coexistence is the very thing that makes this country great, and who all want our nation to succeed as one.  Cathy and I extend our deepest sympathies to the Bush family, both to those who reside here in Connecticut as well as throughout the country.”