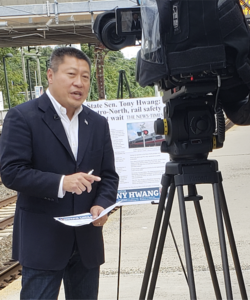 “Metro-North Railroad is part of the way of life in southwestern Connecticut. Every day, thousands of residents rumble over its tracks for work, school, or to head into New York City for a show or a ballgame. Like the other parts of our daily lives, we want Metro-North to be efficient and, most importantly, safe. We don’t want to have to worry when we travel. Ten years ago, Congress passed legislation that all railroads in the United States must install Positive Train Control (PTC), a life-saving system that helps avoid deadly rail accidents, on their railways.

A computerized network of GPS, sensors, transmitters and other equipment that reduces the potential for human error, PTC could have prevented multiple rail accidents in the years since Congress instructed Metro North to act. The U.S. Government gave the Metropolitan Transportation Authority (MTA) $1 Billion to complete the task on all the rail lines they oversee, including Metro-North. A decade later, it’s still not finished.

In recent conversations with Metro-North leadership as well as CT DOT, I have been told that metro north has been fullyinstalled, but is not yet fully operational.

I penned a letter to Metro-North President Catherine Rinaldi, as well as an op-ed to the Hearst CT NewsTimes onSeptember 7th, asking Metro-North leadership to answer this important question:

What is the plan to get PTC fully operational as quickly as possible and When?

Unfortunately, we learned that although Metro-North’s PTC system would be installed by the December 31st 2018 deadline, the system will not be “fully operational.” In her response, Metro-North President Catherine Rinaldi stated she is “highly confident” that metro-north will have met the four required criteria to be approved for an “alternative schedule for PTC implementation” that gives them until 2020 to have the system fully operational.

A two-year delay? That is unacceptable and deeply troubling. Neither Metro-North nor CT DOT seem to grasp the urgency with which they need to act to ensure it is fully operational.

Passenger and worker safety, not meeting arbitrary deadlines, should be Metro-North’s and our CT Department of Transportation’s top priority in Commuter Rail service. We know PTC will improve railway safety. CT DOT and Metro-North needs to get this done. No excuses.  No more delays. It’s about our money, our safety, and our rail line. We want accountability and action.

As Sarah E. Feinberg, [then] administrator of the Federal Railroad Administration, said in 2016, ‘Every day that passes without PTC (Positive Train Control), we risk adding another preventable accident to a list that is already too long.’ If the FRA administrator was that concerned, I am and our legislature should be too.”