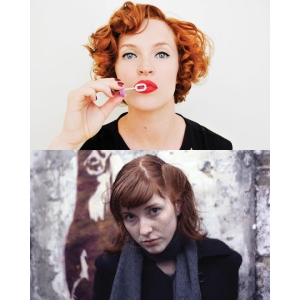 On Saturday, September 10th, SPACE on Ryder Farm, in conjunction with Hayfields, closes out their Seasonal Supper series with a bang. Pairing hyper-local cuisine sourced from Putnam and Westchester counties prepared by Hayfields with performances from New York City’s rising stars, the evening will highlight the work of Grace McLean and Brittain Ashford.

Called “electrifying” by The Huffington Post and “spectacular” by the New York Times, Grace McLean is a multi-hyphenate actress-singer-writer-teacher on the rise. In addition to performing in Off-Broadway hits like Natasha, Pierre & the Great Comet of 1812, Brooklynite, Bedbugs!!! and Sleep No More, Grace also makes time for her acclaimed original music, both as a solo artist and with her band Grace McLean & Them Apples. With a sound that combines Regina Spektor’s quirkiness, Nellie McKay’s jazz sensibilities, Fiona Apple’s irreverence, Kimbra’s sass and Merrill Garbus of tUnE-yArDs’ rhythm, McLean adds up to one beautiful weirdo. Manhattan User’s Guide writes, “this pop and jazz singer writes seriously infectious melodies with seriously antic lyrics. Her voice can raise the roof, or she can slide off a note and break your heart.”

Grace was a headlining performer and instructor at the SingStrong a capella festivals in DC and Chicago in 2014 along with a capella group Ten of NBC’s “The Sing Off” and singer/songwriter Blake Lewis, runner up on season six of “American Idol.”  Most recently, Grace McLean & Them Apples opened the Lincoln Center American Songbook series with a sold out concert. Grace’s work as a performer and educator has taken her to Jamaica, Scotland, Italy, Croatia, Serbia and Pakistan. In New York, you can find her and her band at Joe’s Pub, 54 Below, Rockwood Music Hall, Ars Nova, and the Museum of the American Indian, where she performed as part of a panel discussion on storytelling for The Economist’s 2012 Ideas Summit. As a performer Grace has been seen at Lincoln Center, New York City Center, BAM, and numerous other venues both uptown and downtown. McLean’s pop opera In The Green (about 12th century German mystic Hildegard von Bingen) has been developed at CAP21, SPACE on Ryder Farm and the Johnny Mercer Writer’s Colony at Goodspeed.

Brittain Ashford is a Brooklyn-based singer-songwriter. She performs with the band Prairie Empire and with Ghost Quartet. She appeared in Dave Malloy's hit musical, Natasha, Pierre and the Great Comet of 1812. Her first full length album "There, But for You, Go I" was released on Paris based Waterhouse Records in the Spring of 2008. She released a second album, "The Salt", under tPrairie Empire with the help of her fans and Kickstarter.

Ashford was nominated for a 2014 Lucille Lortel Award for her work in the critically acclaimed musical Natasha, Pierre and the Great Comet of 1812. She is currently working with Dave Malloy, Gelsey Bell and Brent Arnold on the new show/song cycle GHOST QUARTET. Ashford will make her Broadway debut this fall, starring in the Broadway production of Malloy's Natasha, Pierre and the Great Comet of 1812.

Don’t miss out on these two powerhouse performers! Tickets available at www.hayfieldssupper.eventbrite.com. Use promo code HAMLETHUB90 for access to specially discounted tickets.