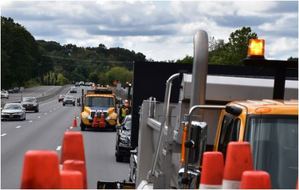 Zervas was observed traveling at rate of 108 miles per hour in a marked and active construction zone with a posted speed limit of 55 miles an hour on Interstate 684 in the town of Bedford.  A Trooper from the Troop K TIM detail conducted a traffic stop, and issued tickets for reckless driving, speeding in a work zone, as well as two additional vehicle and traffic law violations.

The New York State Police TIM detail completes over 95,000 hours of dedicated work zone traffic enforcement and safety details statewide per year since 2008 in furtherance of our mission to make public roadways safer for all users.