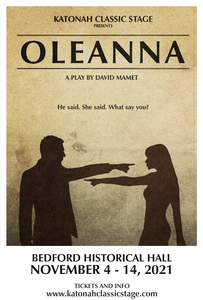 Katonah Classic Stage (KCS), Westchester County’s newest, nonprofit, professional theatre company dedicated to classic dramatic and comedic works, presents David Mamet’s seminal play, Oleanna, this November at the Bedford Historical Hall. Founded in 2019, KCS was originally planning to present its inaugural show with a relatively large cast, Shakespeare’s Twelfth Night, in May 2020. However, like most live performance art, KCS had to pivot and get creative to keep audiences both engaged and safe from Covid-19.

In addition to online and local community events, KCS hosted their second outdoor, annual film festival at the Bedford Playhouse this past August, as well as a masked, socially distanced, one-man show, Will Eno’s Thom Pain (based on nothing), in late April 2021. Similarly, with Oleanna, KCS will continue to monitor Covid-19 conditions and they will take all necessary precautions to keep attendees safe.

KCS Founding Artistic Director Trent Dawson is an actor and director, best known for his long-standing, Emmy-nominated role on As the World Turns, who has been working on television and on stage for nearly 30 years. He and his creative team chose "Oleanna" for the 2021 Fall production. This exhilarating drama explores and upends our concepts of power, privilege, consent, and political correctness.

Debuting off-Broadway in 1992, in the wake of the Clarence Thomas/Anita Hill hearings, KCS’s Oleanna takes on new life as it is reimagined in a world of #MeToo and cancel culture. On choosing Oleanna for this production, Dawson said, "Aside from being a magnificent display of playwrighting craftsmanship, the piece feels so relevant to the current dialogue. After seeing this show, I want people to leave the theatre inspired to continue these conversations. Go grab a drink and debate, discuss, and, ultimately, decide where you stand on these important issues.”

A combative two-hander, Mamet’s play revolves around a nervous, young college student who meets with her professor in his office to discuss her grades. What transpires between them is nothing less than riveting and will leave the audience ready to defend their chosen champion in this explosive fight for power. The New York Times called Oleanna’s original off-Broadway production “a typically virtuoso display of Mr. Mamet's gift for locking the audience inside the violent drama of his characters.”

The 2022 season of KCS is currently in development. Dawson & Team aim to provide seasonal, professional productions of classic plays in Northern Westchester, cultural enrichment events like the KCS Film Festival and play readings at local libraries, and they will eventually offer educational programs to children and adults with an emphasis on Shakespeare and other master dramatists. Staffing, casts, and crews will draw from the exceptional talent found locally as well as New York City and the tri-state area.

Tickets:           On sale now at www.katonahclassicstage.com/oleanna

Questions? Email  This email address is being protected from spambots. You need JavaScript enabled to view it.