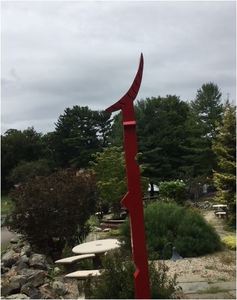 April Herbert, of Pound Ridge, New York, has led an interesting life and has found a way to pay it forward. Almost 40 years ago, at the age of 45, the mother of three saw a small advertisement in the New York Times promoting a four-day welding course at the Somerstown Gallery in Somers, New York. Herbert had always loved the arts, but had “never found my medium,” she said. When she mentioned the course to her husband, he told her that if she didn’t take it, he would take off from work and take it himself. So she did.

The course ran from 9 a.m. to 5 p.m. during a heatwave that year — around 1978 — and Herbert came home looking like a chimney sweep each day, she said. But she loved it and had finally found her medium. “I rented some welding equipment and began working in my backyard, where I promptly set my grass on fire.”

Looking back now, as she approaches the age of 85, Herbert laughs when recalling how a four-day course resulted in a prolific career as a sculptor.

“I saw a bumper sticker once that said ‘Welders Make the Greatest Lovers,’” Herbert recalled. “It’s because everyone is so helpful and nice. They generously share their techniques.”

That generosity apparently pays forward, because Herbert recently donated seven sculptures to Ives Concert Park on the Westside campus of Western Connecticut State University, many of which went on display to the public for the first time this weekend.

Herbert describes her sculptures — made primarily of oxyacetylene-welded steel that comes in 4x8 sheets, brazed metals and some found objects — as contemporary or anthropomorphic. “My pieces often look like nature or birds, but that wasn’t usually the intent,” she said. “I like my work to be open to free interpretation and ‘the eye of the beholder.’”

Born and raised in Manhattan, Herbert later moved to Mount Kisco and Pound Ridge, where once she began sculpting, she became a member of the Katonah Museum Artists Association, the National Association of Women Artists, the Pound Ridge Art Guild (which she served as president), the Stamford Art Association and Ridgefield Art Guild.

Herbert estimates she’s created nearly 300 pieces in her career — 60 of which are in private collections and five of which were commissioned works.

She says she’s “hanging up the welding torch” to enjoy traveling and life in South Carolina, where her new medium is art photography based on nature, travel and manipulated images. Herbert already has won awards and sold several pieces of her new artistic endeavor, which is no surprise to those who know her.

“I’m thrilled at finding a nice home for some of my work,” Herbert said. “Ives Concert Park is so beautiful. I’m really excited that my pieces will be displayed there and wish I could be there to see it. In my dreams, this is the kind of place I’ve always wanted my sculptures to go to.”

For more information, contact Ives Concert Park at This email address is being protected from spambots. You need JavaScript enabled to view it. or (203) 837-9226.