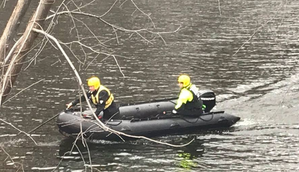 On January 1, 2019, the New York State Police are investigating a boating incident on the Muscoot Reservoir in the town of Lewisboro which resulted in two fatalities. The State Police confirm there are no additional fatalities involved in the boating accident.

Preliminary investigation indicates two male victims were on the water fishing yesterday evening when their boat capsized for an unknown reason.  The incident is believed to have occurred sometime after 5:00 p.m.  The aluminum boat was 12 feet in length with seating for two persons. Both victims had life preservers but succumbed to the frigid 38-degree Fahrenheit water.

The deceased were identified as Ngan We Kong, age 48, of Brooklyn, and Weitao Ma, age 47, of Staten Island.

The drowning was reported to 911 at approximately 6:55 a.m. by a fisherman.

The preliminary cause of death has been deemed to be related to drowning and hypothermia.  This incident continues to be considered accidental.  The specific cause of death is pending determination by the Westchester Medical Examiner’s Office.

This investigation was conducted with the New York City Department of Environmental Protection, Westchester Medical Examiner’s Office, and the Goldens Bridge Fire Department.