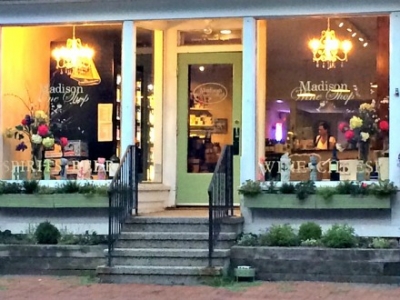 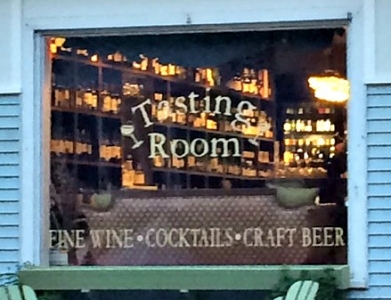 When Whitney Mitchell Algieri took ownership of the keys to the Madison Wine Shop in October of 2011, she and her husband were very pleased with their new "home" - the iconic business on "Main Street" that Algieri had purchased from Rick Lewis's sons. Known for his Rick's Picks, Lewis was the well-respected wine guru who had been at the helm of the shop for 25 years. From the start, Algieri and her husband made incremental improvements to the structure over the next one and a half years, as they continued to feature mostly wine in the building where the shop operated on Boston Post Road along side Village Pizza.

Then on June 20, 2013, everything changed when fire consumed the structure. When Algieri learned of the fire, she envisioned damage of course, but not a total loss. Nothing could be salvaged and the loss was a devastating blow, yet she knew they would re-open. When it became apparent that rebuilding would be a lengthy process, she felt it was time to start looking elsewhere for a new location. "We couldn't afford to lose another summer of business," Algieri said. She had her eye on an optimal site further up Route 1 but ultimately zeroed in on the building where the shop now resides, preferring its close proximity to the center of town.

Formerly Asiye's Boutique, the interior of 30 Wall Street was re-imagined by Algieri as she designed the layout and décor herself. She and her husband, a wholesaler in the business, had definite opinions about what they wanted from their new space, including a generous tasting area. In the old location, they used a table in a small room in the back of the store, while in their new digs, the tasting room takes center stage. Algeiri laughs when she remembers their wine storage in the old location. "We stored wine upstairs but the building wasn't air conditioned so we had several AC units running constantly. Here there is perfect wine storage in the basement, where it is naturally cool." Ample off-street parking behind the building is another plus in accommodating customers.

When they initially envisioned their present space, Whitney's husband, John, knew he wanted more room allocated to craft beers and other spirits. He hoped for 12 refrigerator doors of beer, and they now have it. A glance through the glass paneled doors reveals many local labels including Thimble Island, Mystic Bridge, Stony Creek and Overshores to name a few. There are also gluten-free varieties due to customer demand. When the customer speaks, The Wine Shop listens. In fact it's thanks in part to the customers that The Wine Shop found its way back after the devastating fire. Not only were the structure and products lost, but the computer and its data was fried. Algieri relied on sales reps and distributors to help them re-stock, but often it was a customer who would inquire if they still carried an old favorite, to which Algiere would reply "Oh that's right! We will order it again and have it for you next time!"

The beautiful brassy oversized sign that originally adorned the entrance of the shop on Boston Post Road had gone missing for a while after the fire. Mention of it in a news article brought it back from hiding, when one day it appeared at the back door of the new shop on Wall Street. A customer had rescued it from the debris pile and essentially gave it safe storage until the alert was issued for its return. Now it hangs from its interior perch, the old English font surrounded by grapes and leaves acting as more of a design element than a sign.

Another objective with the expanded floor plan was accomplished when they carved out a nook for refrigerated cheeses. Algieri believes in keeping business local when she can, and was able to strike up a relationship with Fromage in Old Saybrook – a gourmet store with more than 100 cheeses on its menu, many of them produced in Connecticut. Wine and cheese are a natural pairing and it's been a win for both businesses to offer a variety for tastings and for purchase. Algieri also contacted the owner of (Madison business) Shoreline Vine proposing to serve Vine's olive oil with bread during the shop's free wine seminars held every other Thursday.

Things have been going very smoothly in their new location as old customers continue to re-discover Madison Wine Shop after its disappearance from downtown's main street. Ideally, Algieri would love to have her staff familiar with every product they sell – not just the packaging, but the taste. Informed staff, after all, translates to quality service and satisfied customers. Sharing knowledge with customers through free weekly tastings maintains a healthy business model and Algieri sees it as the key to their success.

Beer tastings are on Thursday evenings with wine and cocktail tastings held every Friday, Saturday and Sunday afternoon. Stop in this weekend during the Madison Sidewalk Sale (July 24-27) and you might just discover your new favorite libation.