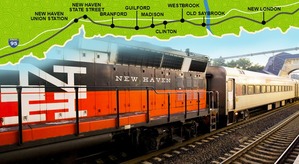 The Connecticut Department of Transportation (CTDOT) today announced that beginning Tuesday, January 22, 2019, six weekday trains will be restored to the Shore Line East (SLE) schedule. CTDOT also announced changes by Amtrak to reduce overcrowding on afternoon trains on the Hartford Line between New Haven and Hartford.

The Shore Line East trains will replace scheduled bus service that has been operating since April 2018. Additionally, two Friday-only trains will now operate every weekday to provide customers with additional travel options.

On the Hartford Line, in order to address persistent overcrowding on afternoon Amtrak trains, the DOT has worked with Amtrak to limit advance ticket sales through Amtrak’s reservation system. The change took effect on January 2 for Amtrak Train 475 (Hartford to New Haven) and Train 474 (New Haven to Hartford), making room for up to 72 CTrail Hartford Line ticketed customers on these trains. CTDOT and Amtrak are monitoring ridership levels and will consider additional changes to the reservation system as needed.

The following SLE trains will be reinstated on Tuesday, January 22:

“We are pleased to return these trains to the schedule, but our work is not yet done. We will work tirelessly to restore full train service on Shore Line East. This is our goal. Our customers deserve no less.” said CTDOT Commissioner-designate Joseph J. Giulietti. “And on the Hartford Line, we believe these changes will alleviate some of the ongoing overcrowding on weekday afternoons. We thank Amtrak for its willingness to make these changes.”

CTDOT has been working with Amtrak to accelerate necessary repairs to the aging diesel locomotive and rail car fleet on Shore Line East. In order to get rail service back to normal, some rail cars and locomotives were shipped out of state to other Amtrak facilities for repair. Work shifts were added at the SLE New Haven shop.