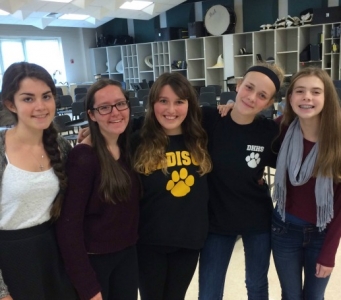 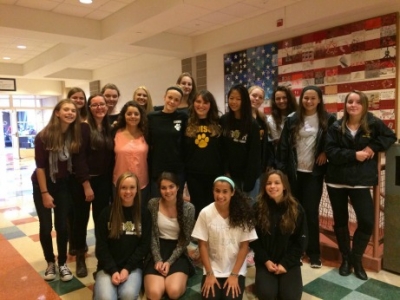 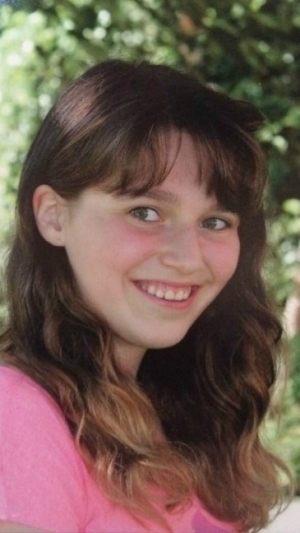 Cancer has a long reach, touching everyone in some way, and while it’s a harsh battle at any age, it’s particularly cruel when it involves a child. While sympathy and prayers are a good start to supporting families of a sick child, a Madison teen is going a step further to help kids her age who are struck by cancer.

Alexandra Minutillo, a freshman at Daniel Hand High School and the founder of Smiles for Smilow, has pulled together a grassroots campaign to support kids with cancer, ages 10 to 18.  As she gets older, Alexandra realizes how devastating and life-changing cancer can be. With this thought in mind, she set out to see what she – a kid herself- could do to help somehow.

Her cousins and other members of her family do a lot of volunteer work for St Jude’s Hospital, and that played into Alexandra’s consideration as well. Thinking locally, she contacted the fundraising specialist at Yale Hospital, who in turn put her in touch with Charlotte Beales, the Child Life Specialist for Pediatric Oncology Division at Smilow Cancer Hospital. Ms. Beales was very receptive to Alexandra’s ideas and her desire to help. Beales shared that when kids go through surgery, they get to choose something from a prize closet. Oftentimes, the items in the closet are selected and donated for small children. When ‘tweens and teens have surgery, they too can select from the prize closet, but often there isn’t much of a selection for kids in this age bracket.

Alexandra got really excited about the prospect of being the change that could help other kids, and came up with the concept of “kids helping kids.” When she decided to add the Smile to the campaign, the logo was a no-brainer. It had to be a happy face. A friend of the family who is a graphic designer took Alexandra’s ideas and translated them into a simple but catchy design.

Next, Alexandra knew she needed help with her endeavor, and while her family was a huge resource in terms of contacts and logistics like transportation, who better to turn to than your friends, and other kids who have a desire to help. By starting a school club, she knew she could get the extra hands needed to make this project fly.

Together with co-Vice Presidents, Brooke Kuryan and Elizabeth Howland, Alex Arena artistic director, Marisa Padelli treasurer, and Abby Valentin, PR coordinator, the board sought and received the support of school principal Anthony Salutari. Teacher John Gage agreed to be the club’s advisor. Ready for action, the board members advertised their first meeting, which they hosted after school last week. Not sure what to expect in terms of interest and attendance, Alexandra hoped at least a few kids would stop by to learn more about Smiles for Smilow, and their mission. She was overjoyed when more than a dozen students showed up to get involved.

Smiles for Smilow is going to provide many desirable items for the ‘tween and teen demographic who is hospitalized in the pediatric ward. Looking through her notes, Alexandra ticks off the bounty of treasures she and her committee envision collecting.

“We’re going to buy jerseys, hats, Alex & Ani jewelry, and gift cards from retailers like Barnes & Noble, Aeropostale, Game Stop and Dick’s Sporting Goods – do you want me to keep going?” she asks enthusiastically.  Basically they hope to collect items that any teen girl or boy would gladly accept as a token of support.

How will Smiles for Smilow accomplish this tall order? Through fundraising and donations mostly. Alexandra and her friends plan to approach local retailers as well, but mostly they will be holding fundraisers and trying to get their cause out into the community. The club will have a booth at the home Hand football games, where Smiles will be selling pins, cookies and other things.

At Polson Middle School, Alexandra was a Peer Helper in 7th and 8th grade, and hopes to join Peer Advocates at DHHS in the future. The lessons she learned about leadership and answering a need in her community are clearly evident as she talks about plans for Smiles.

“We want to help kids with cancer and their families during the holidays too,” she says, providing presents that might otherwise be forfeited due to the disruption in life and high medical bills. Alexandra imagines that it would be hard enough for a family to miss their holiday traditions during an illness and hospitalization, adding, “if presents are provided it’s one less thing the parents of a sick child will have to think about.”

To raise awareness, the group is already considering a Pride Day at school, and eventually out in the community. She would also like to see a version of her club filter down to the other schools in town, in order to make a bigger impact.

At this point, Smiles is applying to be a non-stock corporation with the state of Connecticut, with an eye to getting its 501c status in the near future. The organization  falling under the Smilow Hospital umbrella, has been granted permission to use the hospital’s logo in their advertising, which provides a well deserved stamp of validation. With Alexandra Minutillo at the helm, the happy face logo is sure to be an inspirational presence in Madison and beyond.

For more information, contact This email address is being protected from spambots. You need JavaScript enabled to view it.

Smile for Smilow will be holding bake sales Monday, October 13 from 10 to 3 at Robert’s in North Madison and Tuesday, October 14 from 4 to 7:30 at the Guilford Walmart. A website with a Donation link is also in the works.