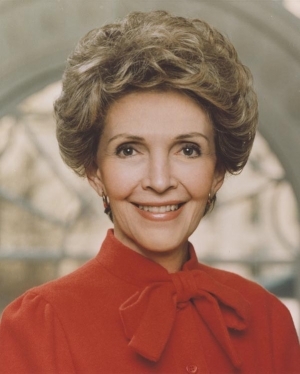 Funeral plans for Nancy Reagan have been announced.

Governor Dannel P. Malloy today announced that – in accordance with a proclamation from President Barack Obama directing flags to be lowered to half-staff in honor of First Lady Nancy Reagan – U.S. and state flags in Connecticut will fly at half-staff beginning immediately until sunset on the day of interment.

The Reagan Foundation announced that Nancy Davis Reagan, former First Lady of the United States, died yesterday, Sunday, March 6,  at her home in Los Angeles at the age of 94. Mrs. Reagan will be buried at the Ronald Reagan Presidential Library in Simi Valley, California, next to her husband, Ronald Wilson Reagan, who died on June 5, 2004.

The funeral of the First Lady will begin on Friday at 11am and will be closed to the public. Prior to the funeral, Mrs. Reagan will lie in repose for public visitation on Wednesday from 1 p.m. to 7 p.m. and Thursday from 10 a.m. to 2 p.m.

A biography of Nancy Reagan can be found here.