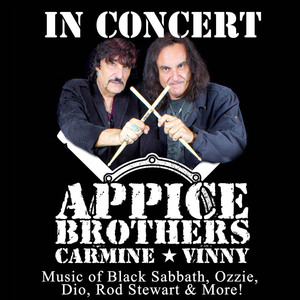 This is not a Drum Clinic!! Drum Wars is a Rock show featuring two of rock's most legendary drummers/brothers performing on the same stage, together with their all star band!

Vinny and Carmine Appice have conquered the rock world for decades and now are conquering the world with their own rock show called "Drum Wars". Hear the greatest hits of Black Sabbath, Dio, Ozzy Osbourne, Rod Stewart, Blue Murder and more..performed by the brothers with the amazing Drum Wars Artillery band!

"Drums Wars" is not a drum show but a high energy, mind blowing "Live" rock CONCERT with legendary songs, play with vehemence!

"Vinny and Carmine break out the heavy artillery in this entertaining no-holds-barred battle to the finish. Carmine and Vinny...Vinny and Carmine! Don't know which one comes first, which one had the mustache first, or which one has the best legs! However, they are both great artists in their own genre. Carmine's track record includes Vanilla Fudge, Cactus, B.B.A. (Beck, Bogart and Appice), and Rod Stewart, to name a few. Not bad! Vinny has driven John Lennon, Black Sabbath, Dio and Heaven & Hell. Not bad! (I've been stuck with one band for 40 years - The Boston Symphony).

From the initial downbeat of this sibling confrontation, this specatcle culminates in the final battle of Drum Wars. The Ultimate battle both playing with great power, imagination and musically spirited. So now, Drum Wars. The tour which Carmine and Vinny demonstrate their sensational playing abilities. It is comedy in that they leave Laurel and Hardy very secure! It is entertainment in that it is great fun. Sincere, open and honest.

Both drummers play great solos and great ensemble work in their own inimitable style. Their years of experience are reflected in their ability to respond musically to each other. I personally am honored to have them both as friends and musical colleagues. May the musical battle continue!" - Vic Firth