The Avon Theatre and Sacred Heart University Present: The FTMA Talk Back Series 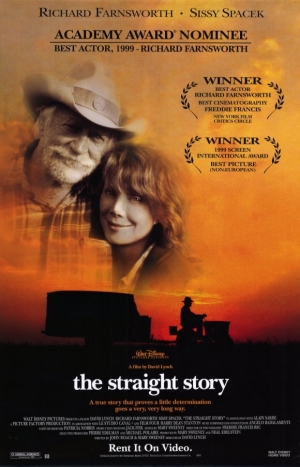 FREE To The Public!

David Lynch offers an uncharacteristically straightforward and warmly sentimental approach in this film, based on a true story, about an elderly man's journey to reconcile with his brother. Alvin Straight is an ailing widower in his early 70's who lives in Iowa with his daughter, Rose, who is mildly retarded. When Alvin learns that his brother Lyle has suffered a stroke and may not have long to live—though they haven't spoken in 10 years--Alvin wants to clear the slate with his brother before it's too late. But Lyle lives in Wisconsin, and Alvin has little money, no car, and no driver's license. He does, however, have a riding lawn mower, and so Alvin hops on board and heads northeast to Wisconsin, hoping to make it while there's still time. Along the way, Alvin makes new friends and refuses to give up on his journey, despite frequent mechanical breakdowns. Richard Farnsworth's performance as Alvin earned him an Academy Award nomination as Best Actor; it was his final screen appearance, as he died a year after the film's release.

DAMON MAULUCCI recently wrote, directed and produced the feature film, DETONATOR.  A Geekadelphia “Indie Film of the Year” nomination, DETONATOR is currently touring the film festival circuit and has been an official selection at Cinequest, Brooklyn, and Indie Memphis. Damon also served as a producer on the feature documentary, PAUL WILLIAMS STILL ALIVE, official selection at Toronto International and SXSW Film Festivals. The film can be seen on the Showtime networks. Maulucci earned his MFA at Columbia University.

The Film and Television Masters program (FTMA) at Sacred Heart University is a one –year conservatory dedicated to the art of storytelling. Students engage in dynamic classroom workshops and lectures focusing on directing, screenwriting, producing, and new media arts. Based in Stamford, FTMA draws from talent and resources in the area and neighboring New York City. Each student produces a cinematic portfolio and rounds out their experience with industry internships. For more information please visit FTMA.sacredheart.edu.