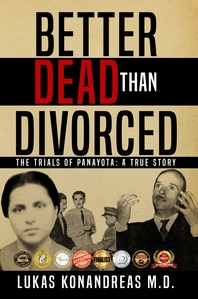 His book, “Better Dead Than Divorced,” is a multi-award winning true story of a young woman whose path crosses with a charming playboy. Their fates collide into a love affair.   Their marriage opens the gates for disaster. He has extramarital affairs, he is abusive to her, and he tries for years to commission an assassin to kill her. She knows about his evil intentions and she is urged to leave him and save her life but her love, her devotion, and societal prejudice against divorced women make her stay and say “ Better Dead Than Divorced”. And dead she ends up one night by a commissioned assassin. Her cousin, a principled man, driven by honor and conscience, fights beyond his modest means in a corrupt system to have justice for her loss served.

Lukas Konandeas M.D. was born at Kupaki, a small mountain village in central Greece. He finished elementary school there and high school in Athens Greece. After graduating from the Medical School of the University of Athens, he migrated to Toronto Canada and from there he did Medical training in Chicago and Fresno, California. He practiced Emergency Medicine in Sacramento, California for about 6 years and from there he moved to Connecticut, where he organized an Urgent Care Center, which he still directs after 30 years. He is married to Georgia, a Doctor of Psychology, and has two sons.