Exhibit Opening: Close to the Line at Housatonic Museum of Art 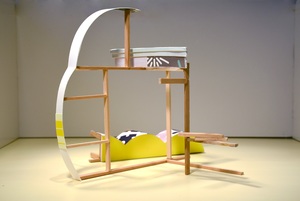 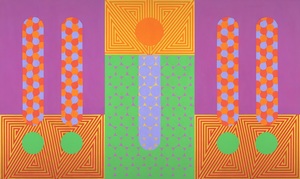 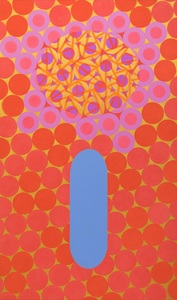 The Housatonic Museum announced it will present ‘Close to the Line: Mari Rantanen and Kirsten Reynolds’ on September 5th. An investigation into geometric abstraction through a performative lens, the exhibit offers brightly painted canvasses and sculptural installations for visitors to reconsider the history of 20th century geometric abstraction, its evolution and its place in the 21st century. The exhibition will be on view in the museum’s Burt Chernow Galleries September 5 – October 12, 2019. A reception with the artists and curator will be held on Thursday, September 5 from 5:30-7:30 p.m. The event is free and open to the public. The museum is located at 900 Lafayette Blvd in Bridgeport, on the campus of Housatonic Community College.

Close to the Line pairs paintings by Mari Rantanen (b. 1956, Finland) and sculptural installation by Kirsten Reynolds (b. 1972, United States) in a selection made by independent curator Barbara O’Brien. Paired together for the first time, both artists utilize an ambitious, formal vocabulary of intense color relationships, and swooping, geometric line. A gallery walk-through with the curator and the artists will take place at noon on Friday, September 6th. The public is encouraged to attend this free event.

Rantanen will show over-sized paintings creating an enveloping experience of bright and lively color. Her signature palette of glowing oranges, reds, pinks and greens create vibrating geometric forms. Many paintings are from the series, “There is a Crack in Everything. That is How the Light Comes In” – the series title borrowed from the song “Anthem” by Leonard Cohen. Mural-like in scale, the paintings fill the peripheral vision and create an evolving experience as the visitor moves through the gallery.

The exhibit marks the grand re-opening of the museum, which has been closed since August of last year. At that time, the walls and floors of the museum’s Burt Chernow Gallery suffered water damage when the sprinkler system activated in response to an overheated computer on the floor above. Fortunately, the museum’s collection did not experience any damage.

“We are thrilled to re-open the galleries with this dynamic exhibit that showcases balance and structure through immersive form and vivid brush strokes, allowing the viewer to interact with the lively work of these contemporary artists” said Robbin Zella, Director of the Housatonic Museum of Art.

Reynolds has exhibited at the Boston Sculptors Gallery, the McIninch Gallery at Southern New Hampshire University; the Museum of Art, University of New Hampshire; the Blue Star Contemporary Museum, San Antonio, Texas; the Currier Museum, Manchester New Hampshire, and the DeCordova Museum and Sculpture Park, Lincoln Massachusetts. She holds a BFA from Syracuse University and an MFA from Maine College of Art. Reynolds is the recipient the Vermont Studio Center Fellowship, New Hampshire State Council for the Arts Artist Grant. She lives and works in Newmarket, New Hampshire with her husband and two children.

Born in Espoo, Finland, Mari Rantanen had a professorship at the Royal Academy of Fine Arts from 1996-2005. Commissions to design large-scale architectural public art works include the Niittykumpu Subway Station in Espoo, Finland and the Citybanan Odenplan Metro Station in Stockholm Sweden. Rantanen has had solo exhibitions in France, Finland, Sweden, Germany and the United States. She has a studio practice in Stockholm, Sweden, Tammela, Finland, and New York City, and studied at the School of the Finnish Academy of Fine Arts in Helsinki, Finland. As a Fulbright Scholar, she studied at Pratt Institute in New York City.

Barbara O’Brien is an independent curator and critic based in Milwaukee, Wisconsin. She was Executive Director of the Kemper Museum of Contemporary Art in Kansas City, Missouri from 2012-2017, after serving as chief curator and director of exhibitions since 2009. O’Brien was an assistant professor in the Art & Music department at Simmons College in Boston (2006-08), editor-in-chief of Art New England magazine (2003-06) and Director of the Gallery and Visiting Artist Program at Montserrat College of Art in Beverly, MA (1990-2001). O’Brien earned an MFA from Rhode Island School of Design (RISD) and in 2006 was awarded the RISD national alumni award for professional achievement. She is an elected member of AICA-USA, International Association of Art Critics.