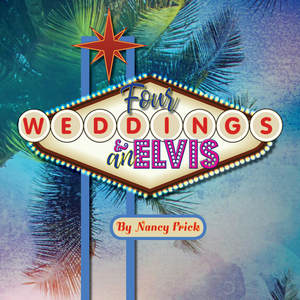 Eastbound Theatre, a division of the Milford Arts Council, is excited to present the second show of its 26th season, the fun and fast-paced comedy, Four Weddings and an Elvis by Nancy Frick, directed by Tanya Feduik-Smith.

A playwright known for comedies that draw from her own life experiences, Ms. Frick has also written the popular shows For Goodness Sake and Exit Date. Ms. Frick also produces a Summer One-Act Festival and was the President of Old Academy Players in Pennsylvania for ten years.

A hilarious play with unexpected twists, Four Weddings and an Elvis is a heart-warming comedy about Sandy, the owner of a Las Vegas wedding chapel. As the play unfolds, the audience experiences the four most memorable and interesting weddings of her career.

Director Tanya Feduik-Smith explains that this play is ”quirky, charming and laugh out loud funny. The actors we’ve brought together master both the comedic timing and heartfelt realism in this script. As more of a dramatic director, I’ve truly enjoyed working on this light, and may I say hilarious play. It will warm up those cold winter nights ahead!”

Performances will be at the MAC January 31st through February 16th, 2020

For more information contact the Milford Arts Council at 203-878-6647 or online at www.milfordarts.org.

For more information contact the Milford Arts Council at 203-878-6647 or visit milfordarts.org

We present our entire Eastbound Theatre season series with gratitude to our sponsor, COLONY GRILL