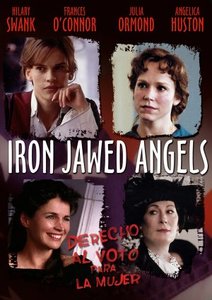 Milford Suffrage Centennial Committee and Milford Public Library are co-sponsoring a screening of “Iron Jawed Angels” as part of Milford’s year-long commemoration of the 19th amendment. The film will be shown in the Fowler Building, 45 New Haven Ave. in Milford on February 20 at 7pm, next door to the Library. Please enter in the rear of the building.

German filmmaker Katja von Garnier directs the HBO original movie Iron Jawed Angels, inspired by a pivotal chapter in American history. Hilary Swank plays Alice Paul, an American feminist who risked her life to fight for women's citizenship and the right to vote. She founded the separatist National Woman's Party and wrote the first equal rights amendment to be presented before Congress. Together with social reformer Lucy Burns (Frances O'Connor), Paul struggled against conservative forces in order to pass the 19th amendment to the Constitution of the United States.

This event is free and open to the public. Light refreshments will be served.