For the first time in 321 years, General George Washington will visit Milford 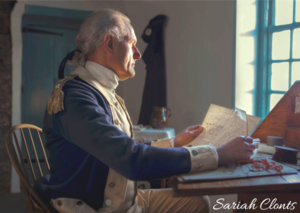 For the first time in 321 years, General George Washington will visit Milford, and on the General’s birthday, no less! He will be visiting Milford Public Library, 57 New Haven Ave., on Saturday, February 22 at 2pm.   Re-enacted by John Koopman III, General Washington will tell us about the Revolutionary War and his role in it. He’ll describe the siege of Boston, the Battle of Long Island, his retreat through New York and New Jersey, the crossing of the Delaware, and many other high points (and low points) of the war.

John Koopman III was born and raised in the Boston area. His passion for military history began at an early age. He became involved in Revolutionary War re-enacting in 1998 and since 2006 has been portraying General Washington at reenactments in Connecticut, Massachusetts, New Jersey, New York, South Carolina, and Virginia. He has also portrayed Washington in documentaries shown at state and national parks, on television, and for national theatrical release, including the Mount Vernon Revolutionary War 4D Experience film (2017), the Monmouth Battlefield State Park Visitors Center film (2013), The American Revolution (television – for the American Heroes Channel, 2014), and America (in theaters, 2014).

Koopman lives in Connecticut with his wife, Elizabeth, and his horse, Skills, whom he often rides at reenactments. He works as a technician for an alternative energy company. He is the author of the book, George Washington at War – 1776, available on Amazon. Copies of the book will be for sale for $11.00.

This event is co-sponsored by the Milford Public Library and the Milford Suffrage Centennial Committee.