Milford Library Presents: The Vietnam Era, Breaking into the Home of Every Citizen 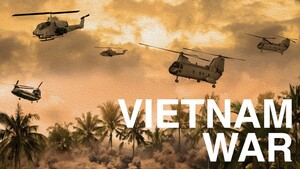 Our favorite historian, Hamish Lutris, takes us back 50 years or more to the Vietnam Era, a tumultuous time in American history. Divisions in our society were forged during this time, and they remain today.

The last in the series “Breaking Into the Home of Every Citizen”.

Vietnam was transformative: the war was the first conflict in the United States history to be visible every night on the televisions of the nation. For the first time, the United States fielded majority-minority forces, an army drafted and uncertain of its mission. Friction between those who supported the government and those who protested the war began to be seen on the streets of American cities.

Colleges trained future officers even as they held anti-war activities, which clashed with tragic results. More than any war in recent history, Vietnam lingers in the memories of many, even those not directly involved in it. This presentation will center on the Vietnam War’s effect on American society and on the relationship between the government and its people, which was irretrievably altered by the war.

Lutris has lectured in libraries throughout the state, and his talks are well researched, lively and engaging. His knowledge of history is more than impressive.

To register for this Zoom program, please contact: This email address is being protected from spambots. You need JavaScript enabled to view it.

Questions may be addressed to: This email address is being protected from spambots. You need JavaScript enabled to view it.