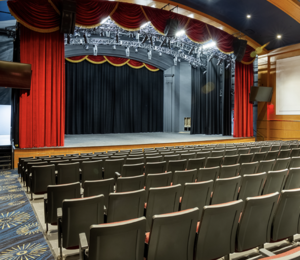 The Sacred Heart University Community Theatre will celebrate its grand opening Labor Day weekend for an exciting new era of live performance, film and educational programming at the bustling corner of Post and Unquowa roads.

A Sept. 2 ribbon-cutting with town and University officials will precede opening weekend events, including a Friday, Sept. 3, performance by NBC’s The Voice winner Javier Colon and his band and an evening with Tony nominee Megan Hilty of TV’s Smash and Broadway’s Wicked on Saturday, Sept. 4. On Sunday, Sept. 5, the SHU Gospel Choir will perform with Angela Clemmons, powerhouse back-up singer to Aretha Franklin, Elton John, Michael Jackson, John Legend and more.

“The University is excited to officially reopen this Fairfield icon after completing our renovations,” said SHU President John J. Petillo. “We look forward to offering live performances, film festivals, discussions, book talks/signings and much more for members of the SHU community and the community at large.”

The media is welcome to the ribbon-cutting ceremony, which will take place at 11:30 a.m., Sept. 2, outside the theatre with First Selectwoman Brenda Kupchick, SHU dignitaries and local legislators.

Opening weekend kicks off with Connecticut native Colon in a live, full-band performance. Colon burst into the national spotlight in 2011, when he became the winner of the first season of NBC’s The Voice, and signed with Universal Republic Records. Since then, he has been performing his music all over the world, touring with acts like Maroon 5, Train and jazz legend Dave Koz.

Award-winning singer and songwriter Matt Cusson, who has toured with Christina Aguilera, India Arie and Dave Koz, will open for Colon.

Fresh from playing seasoned triple-threat Ivy Lynn on NBC’s musical drama Smash, Hilty has wowed audiences as Glinda in Broadway’s Wicked, Patsy Cline in director Callie Khouri’s Patsy & Loretta and Doralee Rhodes in Broadway’s 9 to 5: The Musical. She has performed with the New York Pops at Carnegie Hall, the National Symphony Orchestra at the Kennedy Center and the New York Philharmonic at Lincoln Center, as well as headlining residencies at New York’s legendary Café Carlyle.

With more 30 years as a much-in-demand professional singer, Clemmons has worked with Celine Dion, Aretha Franklin, Justine Timberlake, Steely Dan, Smokey Robinson and many more. The founder and director of Shoreline Soul, the Westbrook resident has toured the U.S. and Canada and her remarkable voice can be heard on dozens of TV and radio jingles.

Festivities continue throughout September with performances by cast members from the legendary Amateur Night at The Apollo; Grammy-winning trumpeter Keyon Harrold; local standouts Jay Stollman, Stephen Peter Rodgers, Coley O’Toole and Fairfield’s own The Low Darts; and The DooWop Project featuring stars of Broadway’s Jersey Boys, Motown: The Musical and A Bronx Tale.

The SHU Community Theatre will also continue its Century of Cinema series and an expanded selection of new independent films, including popular documentaries Roadrunner: A Film About Anthony Bourdain and In Balanchine’s Classroom. The theatre will continue to provide the community with a variety of films, as well as educational film programming, as it has done throughout the summer. After the grand opening, from Sept. 6 to Sept. 11, the theatre will commemorate the 20th anniversary of 9/11 with dedicated films.

“The Sacred Heart University Community Theatre serves as a cornerstone of cultural enrichment to audiences of all ages through entertainment and educational programming, including film screenings, lectures, discussions, live performances and concerts,” Petillo said.

In May 2019, SHU partnered with Kleban Properties and the Town of Fairfield to renovate and reopen the Community Theatre, a century-old crown jewel in the heart of downtown Fairfield. Craftsmen have completely reimagined the former vaudeville and movie house–from the expanded stage and proscenium arch to the modern balcony and VIP skybox.

The new 400-seat theatre plans a full slate of events, academic and youth endeavors, and rental opportunities in the coming year. Exclusive series include:

The schedule comes with myriad ways to collaborate with business, corporate and philanthropic allies, including sponsorship and naming opportunities for series, theatre spaces and individual seats.

For tickets, visit www.shucommunitytheatre.org. For more information on the theatre or to schedule a media tour or interview, contact 203-371-7956. For media questions, contact Kim Swartz at 203-396-8047.

First opened as a vaudeville house in 1920, the Sacred Heart University Community Theatre is a 400-seat cinema and performance space located at 1420 Post Road at the bustling corner of Unquowa and Post roads in Fairfield. In May 2019, Sacred Heart University and Kleban Properties partnered to renovate and reopen the long-shuttered theatre as a contemporary arts and education venue and nonprofit. The SHU Community Theatre is home to a unique blend of film, live concerts and performances, lectures, youth programs and academic endeavors. For tickets and more information, visit www.shucommunitytheatre.org.