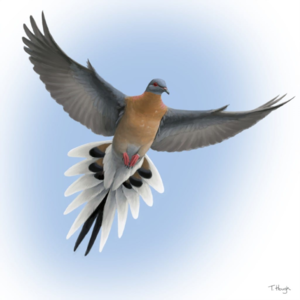 In May 1850, a 20-year-old Potawatomi tribal leader named Simon Pokagon was camping at the headwaters of Michigan’s Manistee River during trapping season when a far-off gurgling sound startled him. It seemed as if “an army of horses laden with sleigh bells was advancing through the deep forests towards me,” he later wrote. “As I listened more intently, I concluded that instead of the tramping of horses it was distant thunder; and yet the morning was clear, calm, and beautiful.” The mysterious sound came “nearer and nearer,” until Pokagon deduced its source: “While I gazed in wonder and astonishment, I beheld moving toward me in an unbroken front millions of pigeons, the first I had seen that season.”

By the mid-1890’s, the flocks measured only dozens at a time instead of millions. In 1914 the last passenger pigeon perished.

What happened? How could this happen so quickly?

Naturalist Gerri Griswold will lecture via Zoom on January 12 at 7pm, hosted by Milford Public Library. Her speaking style is engaging and warm, and she has an amazing depth of knowledge.