Pantochino's "As Long As We're Talking" Debuts for PRIDE Month 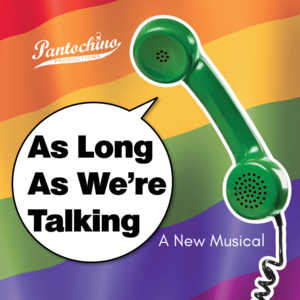 Award-winning Pantochino Productions Inc. will celebrate Pride Month with the debut of a new musical, “As Long As We’re Talking” for a limited engagement of four performances June 24-26 at the MAC, Milford Arts Council on Railroad Avenue in Downtown Milford.

Inspired by actual events, “As Long As We’re Talking” is set in an urban LGBT book store where the cashier receives an urgent cry-for-help phone call from a young gay person about to end their life. It is up to the cashier, and the patrons shopping in the store to keep this person engaged, on the line and alive. The new musical is written by the team of Bert Bernardi (book and lyrics) and Justin Rugg (music), who’s most recent work, “Checking in on Charles,” played to sold out audiences.

“It’s a huge departure for us, tackling subjects like coming out and teen suicide,” said Bernardi, “But as soon as I read the news item about this book store, I knew it was a story that had to be told, and one that would work as a musical—inspiring and up-lifting.”

Featured in the cast are company members Shelley Marsh Poggio, co-producer/designer Jimmy Johansmeyer, composer Rugg, Rachelle Ianniello. Joining them is Tracey Marble, who recently played Miss Biddle in “Checking in on Charles.”  New to the company are Susan Kulp and Micah Soviero.

“As Long As We’re Talking” features settings by Von Del Mar, lighting by Jeff Carr, costumes by Johansmeyer and sound by Bella Genuario. The production is sponsored by the Milford Prevention Council and a portion of all proceeds will benefit The Trevor Project.

“As Long As We’re Talking” plays Friday, June 24 at 7:30pm, Saturday, June 25 at 2pm and 7:30pm,  and Sunday June 26 at 2pm. The show is performed in one act and suggested for ages 13 through adult.  The MAC, Milford Arts Council, is located at 40 Railroad Avenue South in Downtown Milford. Free parking is available at showtimes in all train depot lots. All seats are $30.00. Cabaret seating at all performances. Audiences are invited to bring their own food and drink.  Please note, those attending are encouraged to wear masks until seated. It is also strongly suggested at patrons be vaccinated. Visit www.pantochino.com for full details and tickets.