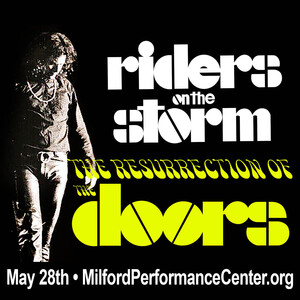 Riders On The Storm

Riders On The Storm have performed thousands of concerts, in dozens of countries, to countless numbers of The Doors' Fans World Wide! From the eerie organ tones to the primal jazz drumming to the powerful, other-worldly guitar, the music is brought to life. The "Brass and Leather" voice of Jim Morrison is alive and well. On stage, Riders On The Storm create a séance-like mood. A mood of resurrection, of eroticism, obsession, ritual, horror and of Celebration! The show is true theater and larger than life. It is an experience that must be seen to be believed and felt.

Eamon Cronin is Jim Morrison incarnate on stage in every way! "Black dressed in leather". He has mastered the gestures, mannerisms and unpredictable stage antics! His performance is backed by his remarkable ability to transmit the voice of Jim Morrison with accuracy that is unearthly, eerie and must be experienced live to believe. From the electrifying hits to soft crooning ballads to shrill otherworldly screams and howls of the Rock and Roll anthems of The Doors, the brass and leather voice of Jim Morrison is alive and well!

Ryan Daily has been the keyboardist for Robby Krieger of The Doors in Paris, France on Jim Morrison's 50th Birthday in 1993! He was hand picked by the Man himself to fill the keyboard duties on recent dates. Ryan is the spitfire of the band! He has mastered Ray Manzarek's unique organ and left-hand bass technique. He plays authentic 60's keyboards like The Doors used including the Vox Continental organ, Gibson G101 organ, and Rhodes Piano Bass. He is a dead ringer for Ray with his rimless half octagon glasses and vintage suits.

Todd Alan McKeague brings passion to John Densmore's "Tribal Jazz" drumming and is a multi instrumentalist. Steve Rutledge has been guitarist for the band for over for over 15 years! His expert finger picking and bottle neck technique are a highlight of the show! These talents are show cased on Spanish Caravan, a crowd favorite! He has studied Robbie Krieger with intense attention to detail.