Elm Shakespeare Brings International Talent to Edgerton Park for The Tempest, Performances are Free of Charge 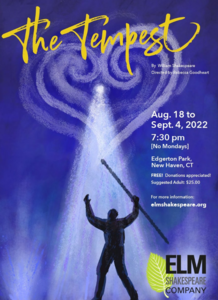 The energy was palpable in the black box at SCSU’s Lyman Center on July 26. For the first time since the Covid-19 pandemic put the theatrical community into a state of limbo and lockdown, Elm Shakespeare Company had begun rehearsals for their annual Free Summer Shakespeare in Edgerton Park.

This week, the company moves to Edgerton Park to begin rehearsing on the New Alexander Clark Playhouse stage. For their 27th Season, Producing Artistic Director, Rebecca Goodheart, has chosen Shakespeare’s The Tempest. Prospero, a sorcerer and the rightful Duke of Milan, dwells on an enchanted isle with his daughter, Miranda. Twelve years earlier, the duke's brother, Antonio, and Alonsa, the Queen of Naples, conspired to usurp his throne.

They set Prospero and Miranda adrift in a boat, who eventually found themselves marooned on the island, once ruled by the banished witch Sycorax. Prospero is served on this island by Ariel, a spirit of the air imprisoned in a tree by the cruel Witch Sycorax, whom Prospero freed with his magic, and Caliban, the bitter son of the long-dead witch. When Prospero realizes that a ship bearing his old enemies is sailing near the island, he summons a storm to seemingly wreck their ship, and set his long-planned revenge in motion.

With all of his enemies in his control and suffering, Prospero finds little joy. Through the open heart of his daughter and the grace of the spirit Ariel, Prospero discovers all the power in the world is meaningless if it only perpetuates hate. For his daughter, for his country, for himself – he must let go of the power and forgive. Emerging from his own Tempest, Prospero chooses to create rather than destroy and in so doing, gives us all a path to a better world.

The Tempest features all the classic aspects of a Shakespearean comedy: young love, a drunkard, a fool, a host of spirits, and, despite its stormy start, a happy ending. To fill out such an eclectic cast, Elm Shakespeare is bringing together internationally and locally acclaimed talent, including: L. Peter Callender, Artistic Director of the African-American Shakespeare Company, Lisa Wolpe, founder of the Los Angeles Women’s Shakespeare Company, and Cynthia DeCure, Assistant Professor of Acting at the Yale School of Drama.

The Tempest raises complex questions for theatre-makers in 2022, and Goodheart, who is also directing this year’s production, wanted to ensure her cast and crew consisted of a diversity of voices, experiences, and backgrounds.

For Elm, The Tempest is the next step in a rejuvenated commitment to their mission of bringing all people together through Shakespeare: onstage, backstage, and in the audience.

“Elm Shakespeare still believes in the transcendent power of these plays,” Goodheart elaborates in an article recently posted to the company’s website. “We believe in the tradition of coming together and experiencing what we share as humans illuminated by these plays. When we come together, there is an incredible multiplicity of identities: young and old, rich and poor, red and blue, devout and atheist, gay and straight, Black, White, Latinx, Asian, Middle Eastern, and so many more. We are a complex community – with contradicting perspectives and attributes, just like the plays. And, we believe that if authentically and specifically represented, all of these people – all of these humans – can see themselves and their stories within the plays.”

More information can be found on the Elm Shakespeare Company website: https://www.elmshakespeare.org/freeshakespeare