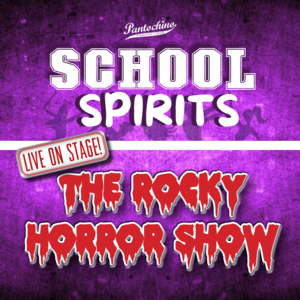 Award-winning Pantochino Productions, a professional not-for-profit theatre company in Milford will open its 2022-23 season with two musicals, Richard O’Brien’s  “The Rocky Horror Show” and a new family-friendly Halloween musical, “School Spirits.” The two shows will play in repertory from October 14 through 30 at the MAC, Milford Arts Council on Railroad Avenue in Downtown Milford.

“Schools Spirits” is a new, family-friendly halloween musical by Bert Bernardi and Justin Rugg. Set at the decaying Mockingbird High, a group of students work to save their beloved school, and the three teen-aged ghosts who live within its walls, from the wrecking ball. Filled with music, laughs and eye-popping visuals, the production features both members of Pantochino’s acting ensemble as well as young cast members’s from Pantochino’s acclaimed Teen Theatre company. Cast members include Jeremy Ajdukiewicz, Valerie Solli and Hannah Duffy as the staff of Mockingbird High. Annabel Wardman, Jaime Lamb, Delia Canarie, Christopher Serrano, Connor Rizzo, Nathan Horne and Maya Barnes are the students

“We’re so excited for this new show—it draws inspiration from so many iconic ‘teen’ movies and TV shows and has just the right amount of Halloween fun peppered throughout,” said Bernardi. “Think of it as the Halloween ‘high school’ musical meets Scooby Do—it’s perfect for the entire family to enjoy,” he added.

The cult classic “Rocky Horror Show” finds newly engaged Brad and Janet lost and at the doorstep of Dr. Frank ’N’ Furter’s mansion. He unveils his latest creation, an artificially made, physically perfect man named Rocky. As they meet a houseful of wild characters, Brad and Janet’s innocence and commitment to each other are tested. Equipped with a rock ‘n’ roll score which includes the iconic “Time Warp”, this comedic musical is a homage to classic B sci-fi film and horror genres.

Both shows feature set by Von Del Mar, costumes by Johansmeyer, lighting by Jakob Kelsey, sound by Tyler Kittleman and musical direction by Rugg. Christina Ronquillo is stage manager for both productions.

Performances of School Spirits are Saturdays and Sundays at 2pm from October 15-30. There is also a Friday, October 14 performance at 7:30pm and a Saturday, October 15 performance at 5:30pm. Performances of The Rocky Horror Show are October 21-30, Fridays, Saturdays and Sundays at 7:30pm. Parental discretion advised for The Rocky Horror Show. For both productions, seating is regular theatre row fashion. Food and drink will not be allowed in the theatre for these two productions. At the time of this announcement, vaccinations are recommended, not required and the wearing of masks is optional for both productions. The Milford Arts Council, The MAC, is located at 40 Railroad Avenue in Downtown Milford. Parking is free at showtime in all train station lots. Tickets for both both productions are available online at www.pantochino.com. Tickets are not available at the Milford Arts Council.