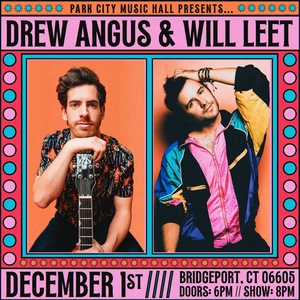 Black Rock, CT - Both Drew Angus and Will Leet have independently had very exciting 2022’s.

Angus played the main stage of Sound on Sound Music Festival in September where his dynamic performance was well received by the mass crowds.  Leet is currently on a National Tour as the lead Guitar player for Sammy Rae & The Friends who have made a meteoric rise over the last 12 months. On December 1st, the pair will each bring their own bands to the stage at Park City Music Hall which celebrates its one-year anniversary this month. Park City Music Hall has fast become a staple in the thriving Connecticut music scene. The state-of-the-art sound system, light show, and overall atmosphere make it a dream venue for musicians and concert goers alike.

Drew Angus is a Bridgeport, CT based singer-songwriter whose music is heartfelt, nostalgic, clever, and catchy, with some vocal fireworks and harmonies that will give you the shivers. He describes it as the intersection of Americana and Rock ‘n Roll with a little bit of Funk and Retro Soul. Angus says, "Park City Music Hall is my home away from home. The community is thriving and I’m excited to share the stage with my friend Will Leet.”

Will Leet  (Sammy Rae & the Friends) is a NYC-based singer-songwriter by way of Madison, CT. He has created a collection of songs over the last 10 years that can be described as "campfire rock with a city groove." Not-too-sentimental lyrics and acoustic guitar soundscapes juxtapose the fast pace of life in New York City and the beckoning call of rural America.

The co-headliners promise an exciting evening of song, story and entertainment!

Get your tickets HERE