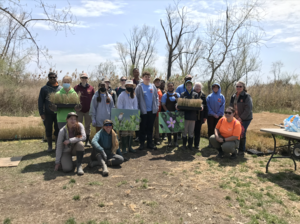 Connecticut’s Beardsley Zoo’s teen Conservation Discovery Corps (CDC) students, in combination with the teen Zoo Career Explorers, as well as volunteers and staff, have cleaned up more than one-half ton of trash from the shores of the Pequonnock River.

Over the past several weeks, the group of volunteers met several times to walk the shores of the river and remove trash and debris from the waterway.

The first Saturday cleanup, with 13 guests from outside the Zoo, including a seven-person group from Shelton High School, resulted in 600 pounds of trash removed from the river and Beardsley Park grounds. Additionally, large metal pieces and wood pallets added another 200 pounds.  A second cleanup resulted in nearly 500 more pounds of trash. Students worked with gloves, waders, and trash pickers to remove waste as part of the Zoo’s “Party for the Planet,” in honor of Earth Day.

On Saturday, April 30, the cleanup crew became a planting crew, setting 2,000 plugs of marsh grass into the Great Salt Marsh in Stratford (an endangered coastal habitat within Stewart B. McKinney National Wildlife Refuge) with volunteers from CT Coastal Audubon, under the direction of The U.S. Fish and Wildlife Service. The three-hour planting was followed by an interpretive talk on salt marsh ecology. Follow up plantings by zoo staff and volunteers have yielded more than 1,800 additional salt marsh grass plugs planted. The CDC, whose motto could easily be “we never hesitate to get our hands dirty,” has now begun planting milkweed seeds to feed Monarch butterflies that make their homes at the Zoo in the summer.

The Zoo’s Curator of Education Jim Knox said, “When it comes to embodying Earth Day's spirit of stewardship and care for our planet, Connecticut's Beardsley Zoo's volunteers and staff lead the way. Whether they are cleaning up a riverbank, restoring endangered salt marsh habitat, or teaching Zoo guests how they can protect endangered species, the Zoo team is always out in front."

The CDC is an award-winning science-based youth education program that introduces young adults to the fields of conservation biology and environmental education and prepares them for science-based careers. The Explorers program investigates Zoo and non-profit careers through workshops and staff shadow days, covering eight different departments at the Zoo.