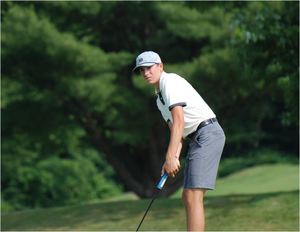 It was inevitable, we’ll say from now on. But even for Ben James, the inevitable has to be earned.

James did that Thursday morning, winning the 78th Connecticut Junior Amateur Championship, his first CSGA Championship, 6 and 5 over Gunnar Granito, the New Canaan High School graduate from Woodway CC who had made the 2019 Junior his coming-out party.

James stayed close to par and close to the game plan he’d employed all week, laying back 40 or 50 yards at times from the long-hitting Granito, but hitting almost every green and always keeping his approaches below the hole on Watertown Golf Club’s befuddling but perfect greens. There are only two holes that have vexed James at Watertown, the 14th and 15th, which he lost in yesterday’s semi-final and recalled that he’d lost to bring on elimination in 2018. By winning with a birdie on the par-4 13th, he didn’t have to face his nemeses.

“I’m proud of the way I managed my game today,” said the 16-year-old champion from Milford and Great River GC, who last week won the AJGA Killington Junior with a 13-under total score. “I had a game plan all week, and I never varied from it. No matter what my opponent did.”

James, 16, a sophomore at Hamden Hall, has played the Junior since he was 11, never making the finals. “This is really great,” he said, “to win the Junior in my home state. I’m very excited.” He shared that excitement with dad Don, his coach, and mom Gretchen Thursday, on hand for the presentation of the William A. Salvatore trophy.

For Granito, who won the FCIAC individual championship in June, it was disappointing, but nevertheless marked a breakthrough in a golf career that may someday rival his first love, hockey. He’ll play both at Berkshire School come fall and with one college golf offer can expect several more now.

“I just wasn’t getting up and down the way I have all week today,” said Granito, who has never reached this level in match play, save country club matches. “And I wasn’t putting myself in very good positions. I try to hit the ball on drives and approaches better than I did today, but still my chips were not good, short a lot. I just couldn’t get that feel until it was pretty much over.”

The turning point came early, mid-way through the front nine. Settling down from what appeared to be early jitters, Granito hit the fifth fairway (after missing the previous two to the right) hit the green and tied James with par to keep things at 3 down. He appeared to have the advantage on the downhill par-4 6th when James uncharacteristically missed the fairway and was blocked by trees. Alas, after James and hit his approach far right of the green Granito rocketed an approach over the green into a flower bed. Both made six. Still three down. Then, on the par-5 7th, where he outdrove James, and watched James hit just short of the green in two, Granito skulled an iron into the penalty area 50 yards in front of him and wound up conceding a birdie to his double.

Still, it was the short game, not the long game, that Granito felt let him down. “Really, what’s got me here this week is just getting up and down everywhere,” said the 18-year-old. “I just couldn’t find that today. I felt like I was hitting some good putts, but they were so long, the make percentage wasn’t very high.”

To watch James and Granito go at it on the 6600-yard Watertown layout was to witness a teenage, Connecticut version of a Dustin Johnson/Brooks Koepka pairing, with James playing the lanky golf-centric Johnson, and Granito, the powerful, all-around-athlete Koepka. Like a budding Koepka, he transformed himself to an elite golfer this week. Having never reached match play in three previous tries, Granito had eliminated some of the strongest players in the field, including No. 1 seed and CIAC Division I champion Chris Fosdick as well as Division II champion Matt Doyle. (Granito comes from an athletic family. His three brothers all played college sports and his sister, Catherine, is a lacrosse player at Michigan.)

Make no mistake, James can hit it as powerfully as Granito when he wants to, having gained both several inches and tens of miles an hour in club head speed since his first junior. James used his length when he hit the par-5 first and came up just shy of the 542-yard, par-5 7th, where his birdie was conceded. But when it didn’t pay to risk trouble, he didn’t. Using three-wood and laying back to 150 yards or more on tight holes such as the par 4 11th. Nevertheless James made four birdies: the first, the third, the seventh and the last hole, the 13th.

“What worked was I was pretty steady,” said James. “And my start was big. I made a nice birdie at one and halved the hole. Then made a great up-and-down on two. And then chipped in on No. 3. That was huge for me. Then I kind of got lucky at No. 6.”

James said after several imprecise chip shots early in the week he went to his home club, Great River, on Wednesday after two matches and worked on that part of his game. “I wasn’t managing the run-out of the chip shots,” said James. “So I worked on that. I did much better today.” James also works with TPC Sawgrass teaching professional Todd Anderson, who he sees two or three times a year for intensive, 5-day work sessions.

By winning Thursday, James earns a spot in next week’s Connecticut Open, July 19-21, at Torrington Country Club. He is exempt from qualifying for the 2020 Russell C. Palmer Cup, and the 2020 Connecticut Amateur. He has also earned a spot on the CSGA’s New England Junior Team, where one of his teammates will be his opponent today, Granito.

“It will be difficult to choose the rest of the team,” said CSGA Executive Director Mike Moraghan. “This field of juniors is perhaps the strongest in the history of this event. The present crop of young players is outstanding, and deep.” With James as medalist last year, the CSGA team dominated the 6-state competition, winning by 17 shots.

James, who has received more interest from college scouts than any other state junior, joins such Connecticut greats as Dick Siderowf, 2018 Connecticut Open Champion John VanDerLaan and Mike Ballo, Jr. in winning the Junior Amateur.

Host professional Ian Marshall is also a past winner. Moraghan thanked Marshall, Superintendent Paul Bonini and the entire membership of Watertown for hosting the event again and praised the condition of the course, including what James and several other juniors called the best greens they’ve played this season.

About the Junior Amateur

This was the 78th playing of the Connecticut Junior Amateur Championship. The championship is open to all juniors who have not reached their 19th birthday by the start of the championship. A single round of stroke play identified 32 players to participated in matches. There were two matches Tuesday and Wednesday to set up today’s 18-hole final.