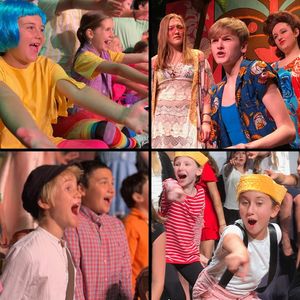 Pantochino’s four week Summer Theatre Camps, a program of the Milford Arts Council, is the centerpiece of the season. Each week, young actors 8 to 12 years old learn, rehearse and perform an original musical comedy. “Pinocchio (Sort Of)” is the featured fare of Session One (July 6-10). The pretty-in-pink princess musical “Regally Blonde” will take to the stage for Session Two (July 13-17). A new musical, “The Sweet Life of Hansel & Gretel” will debut at Session Three (July 20-24) and the final week, Session Four (July 27-31) will recreate a Pantochino favorite, “Jungle Book, Abridged” The four sessions take place at the MAC (Milford Arts Council) on Railroad Avenue in Downtown Milford.

“The continued success of our camps is attributed to the amount of fun our kids have putting on a musical. The shows are original, fast-paced and funny—the children respond to this material. Also, they’re treated with respect and encouraged to have a good time by our professional staff. We’re not an institute or academy—we’re making theatre, and it should be a rewarding, fun-filled experience,” said co-producer Bert Bernardi

The company will continue it’s “Pantochino Jr.” camp for two sessions in their newly-open studio space in the Connecticut Post Mall. The half day camp (9 am-Noon) is an introduction to acting, singing and movement for young actors age 6 and 7 years old. The first session, June 22-25 features “Chicken Little,” and the second session, June 29-July 2 will present “The Little Engine.”

“Last summer’s debut of our junior camp was a huge success—We are so excited to continue this new tradition,” said co-producer Jimmy Johansmeyer.

Pantochino’s Summer Teen Theatre returns for an immersive program (July 27-August 9) at both the studio space in the Connecticut Post Mall and the MAC. The popular theatre experience  for 12 to 18 year olds will feature the Tony Award-Winning musical comedy,“The Drowsy Chaperone.”

“I’m so proud of our Teen Theatre program. Teens travel from all over southern Connecticut to participate,” said Bernardi. “Here, teens play all the roles, and word is out the quality of our productions are unmatched,” he added.

Information, Frequently Asked Questions and Registration for all of Pantochino’s summer programs are available online at www.pantochino.com